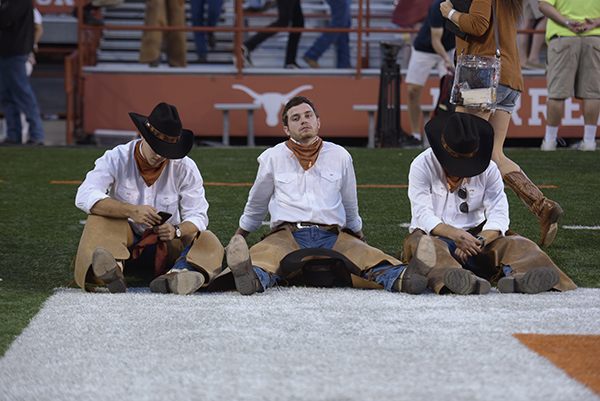 The University has suspended the Texas Cowboys for six years, following a hazing investigation into their fall initiation retreat.

The investigation found evidence of hazing during the fall of 2018 and as far back as fall 2015. New members of Cowboys were subjected to multiple forms of hazing at the September 2018 retreat, including physical brutality, animal cruelty, forced ingestion of unwanted substances and coerced consumption of alcohol, according to the report.

The sanction will be finalized once the Cowboys decide whether to accept the sanction, appeal it or request a formal hearing. During the suspension, the Cowboys, a spirit organization known for firing “Smokey the Cannon,” will be removed from all game day operations and will no longer act as University ambassadors. The last time the Cowboys were suspended from campus in 1995, the Texas Silver Spurs took care of Smokey, according to Texas Monthly.

The report found that during the 2018 retreat, one new member was coerced into biting the head off a live hamster, a practice which occurred also in 2015 and 2017. Other members were required to ingest unwanted substances such as cat food and whole onions and were forced into the cannon’s trailer.

The Cowboys and their alumni group did not respond to requests for comment.

We're discussing this story in our Facebook group, Hooked: Your UT. Join the conversation here.

The investigation was requested by the Cumberland family after their son Nicky suffered fatal injuries in a car crash on the way back from the retreat in September 2018. The crash, which occurred at 5:43 a.m., resulted from the driver falling asleep at the wheel. The hazing investigation found a lack of evidence to support claims that sleep deprivation was used as a hazing tactic.

The Cumberlands first became aware of hazing at the retreat after speaking to Cowboys who attended. They found severe bruising on Nicky’s buttocks four weeks after the crash while he was on life support, and also found a shopping list on his phone that listed abundant amounts of alcohol that new Cowboys were required to bring to the retreat.

Underage drinking is a “major facet of the organization’s culture,” the report said. Members at the retreat told the University they were forced or coerced to consume alcohol, and at the time of the retreat, 14 of the 25 new members were underage.

In 1995, the Texas Cowboys were banned for five years after the death of then-pledge Gabe Higgins. After being hazed at that year’s initiation retreat, Higgins was found dead in the Colorado River near Bastrop with a blood alcohol content twice the legal limit for driving. Following their return to campus in 2000, the Texas Cowboys made a pledge to ban hazing from the organization.

However, the report said that while the Cowboys made attempts at reform, there is still a “disturbing, long-standing pattern of behavior” where “hazing within the Texas Cowboys has not only persisted, but continues to escalate.”

“The facts of the 1995 and current case are so similar it is clear that the Texas Cowboys are adept at passing on traditions, but not lessons,” the report said.

The recommended sanctions include probation for two years after reinstatement, permanent prohibition of live animals at events and the required use of chartered buses for all off-campus events.

“Two families have lost their sons and The University of Texas at Austin community has lost two of its students because the Texas Cowboys continue to perpetuate unlawful and irresponsible behavior time and time again,” the report said.

Other sanctions required for the Cowboys’ return to campus include showing all members a yearly presentation about the deaths of Nicky and Higgins and requiring all new members to read “The Cowboys’ Secret,” a book written by Higgins’ mother about her son’s death.

Allie Cumberland, Nicky’s sister, said the family was satisfied with the outcome of the investigation, but they are especially pleased the University listened to their recommendation of making “The Cowboys’ Secret” required reading. “She worked so hard on that book for so many years and was so devastated when she heard about Nicky,” Cumberland said. “Reading that book should be required for the Cowboys, but I would recommend it to any student organization or student leader because it is so powerful.”

University President Gregory Fenves said in an official statement that he and the rest of campus continues to mourn over Nicky’s death.

“Let me make clear — there is no place for hazing at The University of Texas. The mission of this university — to educate, learn, discover and serve — can only be accomplished in an environment where we respect each other. Where we look after our neighbors, peers and friends,” Fenves said.

Editor’s note: This story has been updated to include further details about the report.