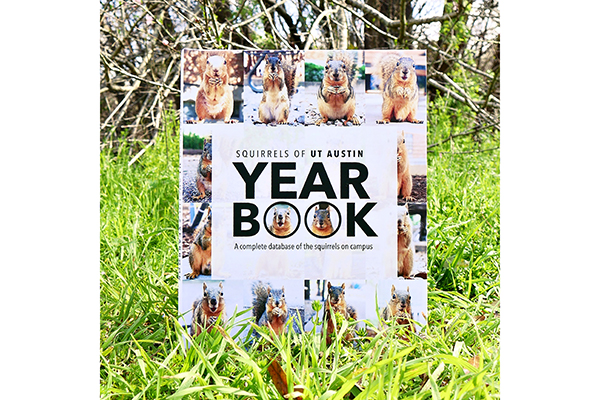 It’s official — over 115 glossy pages filled with friendly campus squirrels will now be available in a yearbook, brought to students by the creator of the “Squirrels of UT” Instagram and Facebook pages.

2016 alumna Marie Romano, the photographer behind the social media accounts, opened a Kickstarter lasting until the end of this month to raise funds for the yearbook project, which reached its goal of $5,000 Monday evening. Currently, the Kickstarter has raised $5,160 with 122 donors and has four days left, so students can still order yearbooks there.

Romano, who has been photographing campus squirrels since her undergraduate years, said she wanted to make the online photos into something more tangible. She said she first began making a simple photo book, which the University Co-op was going to sell.

“I had finished everything around (last) October, and I was about to send an email to get a bunch of books produced, but then it just hit me,” Romano said. “I don’t know if it was a dream or something, but I was like, no, it can’t be a photo book. It has to be more than just a photo book. I (decided) I need to change the whole concept of the photo book into a yearbook.”

The yearbook contains more than 200 individual squirrels split into four classes — freshmen, sophomores, juniors and seniors — complete with sports teams and different majors. Romano also created polls on her Instagram page and awarded squirrels “class prizes” based on votes. Kickstarter donors could donate different amounts to be included in the book, such as $99 to become a professor for the squirrels.

We'll be talking about this story in our Facebook group, Hooked: Your UT. Join the discussion here.

Kara Kockelman, professor of transportation engineering, will be the professor of “acornology” in the book since she donated at the $99 level. She said when she saw Romano post about creating a yearbook, she reached out to offer feedback for
the yearbook.

“Many of us find squirrels to be one of our world’s most accessible and gifted creatures,” Kockelman said in an email. “UT is incredibly fortunate to have so many on campus, offering a nice diversion and access to wildlife during one’s school day or workday. I’ve never seen a book like this. Every page is a distinctive creative contribution.”

Kockelman said her husband, who works in UT’s Office of Legal Affairs, helped review the book to give Romano UT’s permission to publish.

“I think it’s an amazing addition to any animal-lover’s or Longhorn’s coffee table, and is a terrific treat to also place in many UT reception rooms for visitors to browse,” Kockelman said. “This is a terrific graduation gift. It’s just a hilarious token of the time spent here on campus.”

Psychology freshman Siya Asatkar, who enjoys feeding the squirrels, said she has not bought a yearbook yet, but she would love to depending on the price.

“I think it would kind of be the same as the Instagram, because it already has the name and the picture and a personality profile, but after I leave it would be a nice souvenir,” Asatkar said.

Romano said those who ordered through the Kickstarter should have their books mid-May, and she is planning to create a website where people can continue to order the books for $25.