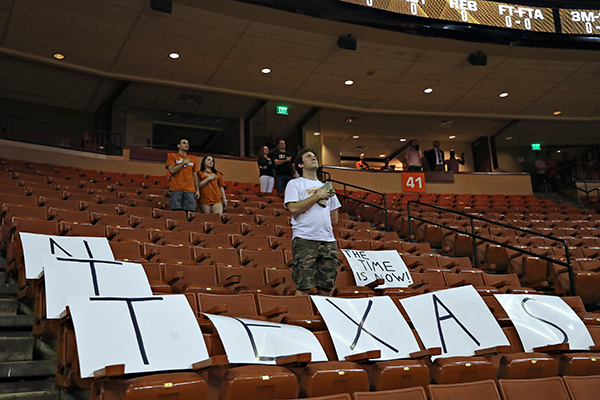 The Frank Erwin Center closed its upper deck for the National Invitational Tournament, so the 3,982 fans in attendance all compacted into the lower bowl of the 42-year old venue.

This crowd formation has been a staple of Texas’ three NIT games this March. A loud, riveting audience aligns the sidelines, but an empty, barren student section lies behind both baskets. This mass vacancy has paved way for another staple to enter the arena — a dancing, bucket hat-wearing superfan who goes by the name “NIT Stu.”

With no fans situated within a 20-feet radius of him, NIT Stu was a can’t-miss spectacle during Texas’ 68-55 blowout win over Colorado. Wednesday night was NIT Stu’s third-straight game at the Erwin Center, decorated with eight full-size posterboard signs, which include “NIT,” “TEXAS,” “The time is now,” “I love the NIT” and “32 > 68.” Each sign was entitled to its own reserved seat, spanning across the entire row.

“It helps having this much space to work with. It’s a big canvas,” NIT Stu said, pointing to his array of signs. “I’m just trying to convince people to love the NIT for what it is. I’m really just hoping to get Texas fans excited about heading to New York.”

Stu Streit, a 24-year old Lyft driver and NIT blogger for The Barking Crow, moved to Austin a few years ago and made it his mission to attend as many NIT games as possible. While the NIT is frequently overlooked in favor of the NCAA Tournament, it’s NIT Stu’s mission to draw as much awareness and attention to the 32-team tournament. But why the NIT?

“Two years ago, that whole debacle where Indiana didn’t know if they wanted to play a home game and they ended up declining the home game because they said it was gonna devalue Assembly Hall,” NIT Stu said, reminiscing on several of his favorite NIT moments. “That same year, Illinois State was playing UCF and Illinois State’s clock broke, so the PA announcer was calling out the time every 15 to 30 seconds.”

The superfan is credentialed to the NIT Final Four in Madison Square Garden for the second consecutive year. While 17.2 million fans were submitting March Madness brackets on ESPN, NIT Stu filled out an NIT bracket and selected Nebraska as the winner. But now, he believes in Texas’ chances.

“I feel like they’re kind of the favorite right now,” NIT Stu said, while keeping tabs on the NC State-Lipscomb game, which ran during the Texas game. “They just gotta keep making shots and it’s theirs for the taking.”

In the city of Austin, it’s just not Stu who embraces the NIT. After originally viewing it as a disappointment, the Longhorns are excited to continue their NIT journey in New York and compete for a championship.

“We’re not in March Madness, we’re still playing,” shooting guard Jase Febres said. “To be able to play in March and go win a championship — that’s our goal as a team. NIT or NCAA, we’re blessed to be in this position, and we’re gonna make the most out of it.”

The NIT fever rang through the Frank Erwin Center postgame as Frank Sinatra’s “New York, New York” resonated through the arena while players’ eyes lit up at the thought of playing in the renowned Madison Square Garden.

“It’s a pretty cool experience for the guys, and we were looking at something as a staff the other day — the all-time great performances that have occurred there,” Texas head coach Shaka Smart said. “We’ll give the guys a little history lesson about that, and hopefully, they’ll make the most of it.”