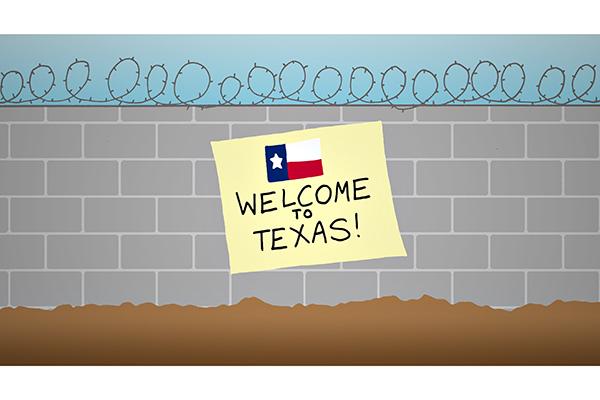 Earlier this month, a member of the Texas House of Representatives proposed a bill to create a “border security enhancement fund” dedicated to strengthening security resources such as physical barriers and new technology on the Texas-Mexico border.

State Rep. Kyle Biedermann, R-Fredericksburg, filed House Bill 4306 on March 8 after early reports suggested he would propose using money from Texas’ Economic Stabilization Fund, a savings account commonly referred to as the rainy day fund, to create the new border security reserve. However, the final version of the bill does not mention the rainy day fund as a source of money for border security projects.

After meeting with Gov. Greg Abbott to discuss HB 4306, Biedermann said in a press release that passing the bill would be beneficial to law enforcement officials on the border.

“Gov. Abbott has stated and Texans know that there is an emergency on our border,” the release said. “HB 4306 would fund border security enhancements like physical barriers, technology, clearing brush, among other things, to help our law enforcement keep our residents safe. This needs to be a priority this session.”

State Rep. Briscoe Cain, R-Deer Park, is also an author on HB 4306. Cain said he supports creating a new fund for border security enhancements because he considers the current situation on the border insufficient and unsafe.

“I believe that we have a duty to secure our border and ports,” Cain said. “Drugs and human trafficking coming through our porous southern border puts all Americans at risk. If Congress refuses to keep Americans safe, then Texas must act.”

Sherri Greenberg, a former state representative and current professor at the LBJ School of Public Affairs, said attitudes about increased border security vary depending on which part of the state a person lives in.

Cain said his office has heard from many constituents who hope to see the bill passed.

“Our office is receiving many calls in support of this,” Cain said. “I’m committed to working with fellow lawmakers to find solutions that protect the integrity of our borders.”

In a report about walls on the United States-Mexico border released in September 2018, the American Civil Liberties Union of Texas said physical barriers were dangerous and ineffective.

“The border wall project is not grounded in facts,” the report said. “Existing border walls blight border communities, tear apart delicate border ecosystems and redirect crossings into the most remote and treacherous areas where thousands of men, women and children have lost their lives attempting to enter the U.S. in search of safety or economic opportunity.”