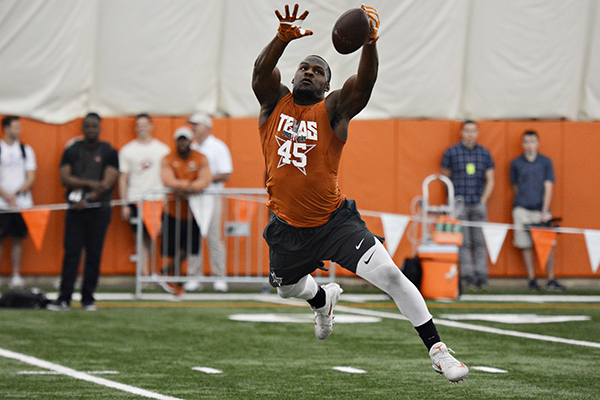 Hordes of NFL scouts flocked to Longhorn standouts Charles Omenihu and Lil’Jordan Humphrey during Texas’ Pro Day held Wednesday. But in the background, many participants used the opportunity to get any scout’s attention at all.

Five Longhorns were invited to the NFL Scouting Combine just over three weeks ago, leaving others questioning why their names were left off the list. As a result, the Pro Day was perhaps the only opportunity for many players to showcase themselves outside of game film.

Among those is linebacker Anthony Wheeler, a linebacker who played at Texas the last four years.  Despite a solid body of work and appearing in 50 career games, Wheeler did not make the trip to Indianapolis earlier this month.

“Not making it to the combine motivated me more to come out here, show them what I got and show them that I could’ve been out there and competed with those guys at the combine with my numbers and performance I put on today,” Wheeler said.

Official 40-yard dash times were not released Wednesday, but Wheeler mentioned that his 29 reps on the bench press, 34.5 inch vertical and 10 foot broad jump were the numbers he “wanted to see.”

Wheeler, like many Texas players, has acknowledged he could be facing an unconventional path to success at the next level if he goes undrafted next month. Still, each of them spent Wednesday afternoon working toward an opportunity which may or may not come.

Tre Watson, a graduate transfer from Cal, split most of the carries at running back last season with Keaontay Ingram. As another NFL Draft uncertainty, Watson relished the chance to work out for scouts after missing out on a combine invite.

“It definitely fuels me,” Watson said. “How many backs went? 27 backs. I want them all. That’s how I’m coming, that’s how I think. Number one, whoever y’all got on y’all’s draft board, put me on that team. Let me compete.”

Meanwhile, wide receiver Jerrod Heard — the textbook definition of a college football journeyman — pictured his Pro Day going differently when he enrolled at Texas to be the team’s next star quarterback. Since then, Heard has successfully made the shift to wideout, but his NFL future still faces questions similar to many of his Longhorn teammates.

“That’s the amazing thing,” Heard said. “Just thinking back all the way to Guyer (High School), I never thought it was just the Pro Day. I was always thinking of just winning the natty, doing what I’ve got to do, stuff like that. (Today) was a pretty nice day. I was excited.”

Heard said most of the feedback he has received from NFL teams is that he could fill a role as a utility player by finding time on kickoffs, punt returns or anything else he’s asked to do. Heard specifically mentioned Taysom Hill of the New Orleans Saints as a name that has been commonly thrown around with his.

While Omenihu and Humphrey are discussed as “when’s” and not “if’s,” Wheeler, Watson and Heard are simply doing what they can now to stick out among the hundreds of names across NFL draft boards. With the Pro Day officially behind them, all that’s left is the waiting game.