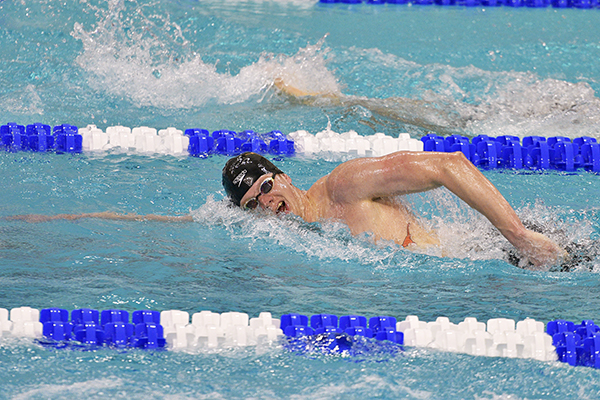 At the 2018 NCAA Men’s Swimming and Diving Championship in Minneapolis, Texas fell behind in third place on day two, just behind Indiana and NC State. One year later, the fourth-ranked Longhorns are already off to a better start.

“I think we look a lot better than we did this time last year so that is always good,” senior Townley Haas said at the conclusion of Thursday’s events.

Falling behind in second place by 24 points Thursday, Texas had some ground to cover heading into Friday’s finals.

However, that didn’t quite happen.

Freshman Charlie Scheinfeld came in third place in the consolation final of the 100-yard breaststroke while junior Ryan Harty and senior John Shebat fell in the top five for the 100-yard backstroke, both receiving All-American honors.

In an attempt to claim his fourth consecutive title in the 200-yard freestyle — being the first swimmer ever to do so — Haas came short of his record. He fell behind for the majority of the race and on the last 50, Andrew Seliskar from Cal-Berkeley pulled ahead of Haas, along with Kibler. Kibler finished in third with a time of 1:31.76, just three-hundredths seconds faster than Haas.

“All in all, I am proud of myself and where the team is right now,” Kibler said. “It felt really good to fight for Texas right next to my teammates (Haas and senior Jeff Newkirk). It was an exciting experience to be next to guys I train with every single day and see how the hard work we put in carries out on the big stage.”

Kibler has had a solid run at his first NCAA’s with Texas. On Thursday, he tied for the win in the consolation final of the 50-yard freestyle with junior Michael Jensen from Cal-Berkeley, and on Friday he outswam an Olympian. He has one more event left: the 100-yard freestyle.

“I made a lot of improvement in my 50 yesterday, so I am feeling like my sprint is on right now,” Kibler said. “The 100 is an event that I have historically struggled in when I was in high school, but ever since I came to Texas, I have been steadily improving in that event more than any other event, so I am pretty excited for that tomorrow.”