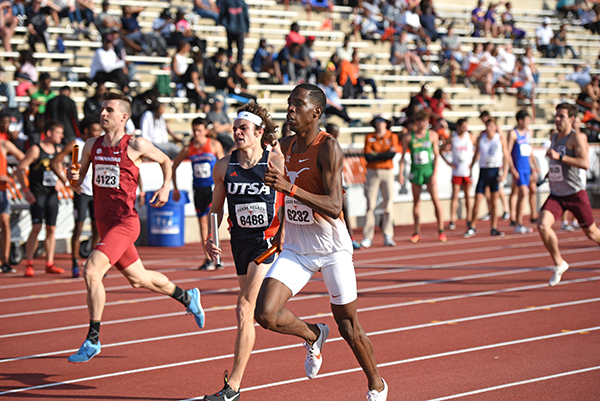 There was no escaping the sun’s rays Friday night at Texas Relays. But the temperature wasn’t too much for the Longhorn men, who brought some heat of their own.

Although track & field is an individual sport in many ways, the Texas men’s victory in the distance medley relay was a team effort.

Charles Mills, who took over the 1200-meter leg, ensured the Longhorns got off to a strong start. Once out of the blocks, Mills ran steady before capturing the lead halfway through. With teammates cheering him on in the bleachers, the distance runner held firm. But toward the end of the leg, Mills was edged out by runners from Texas Tech and Rice.

Baton in hand, the athlete handling the 400-meter duties for Tech zipped ahead of the competition, the distance between him and the next runner significant. Ending the previous leg in third place, Texas’s chances at catching Tech seemed bleak.

But everyone loves a comeback story. Taking over for Mills was sprinter Jonathan Jones, who ran for his life. Jones sped around the track with poise, nearly catching the runner from Tech who took off much sooner. Participating in another race just thirty minutes prior, he made his 400-meter leg look easy.

“(The race) was fun,” Jones said. “I honestly don’t care about gaps. Once someone’s in front of me, they’re now my target. I was already mentally tired, but I wanted to come win this race for the guys and at least run a decent leg.”

Jones’s performance was more than decent, positioning Texas in a close second place for the start of the third leg.

Next up for the Longhorns was Brendan Hebert, who turned in a gritty 800-meter performance. Fighting to maintain Texas’s second place position, Hebert ran with teeth clenched and eyes fixed straight ahead. The “Texas Fight!” chants erupting from the stands was fitting background noise for Hebert’s effort.

By the time last night’s 3000-meter steeplechase winner Alex Rogers got the baton, it began to look like Texas could take first. Going into the second lap, Rogers passed up Tech, who had been leading for most of the race.

That was the end. Blazing a trail for the remainder of his milesplit, Rogers moved farther ahead of the competition. Once he crossed the finish line to signify the win for Texas, he put up the Longhorns’ hand gesture and beat his fists up against his chest.

“I was hype,” Rogers said. “This is my last go around, so I’m just trying to give it everything I’ve got for the team. My days, my heartbeats — are limited. Even if I feel bad I gotta go (win) it for them.”

Today, the Longhorns demonstrated tremendous athletic prowess, but they also showed that to win, it takes a team effort.