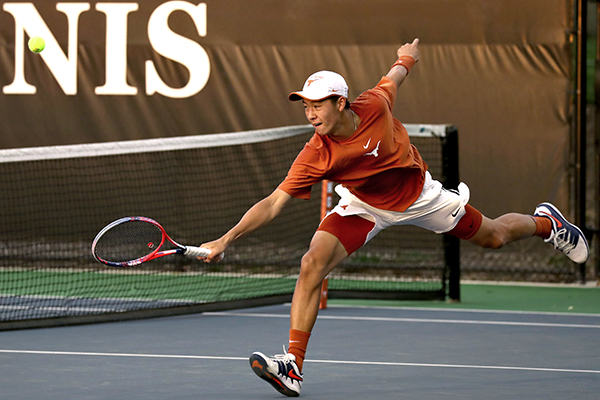 The No. 4 Texas Longhorns took to the Texas Tennis Center on Friday night seeking to open Big 12 play with a win, while also securing an 18–2 record, which would tie the school record for wins through 20 games.

The Longhorns would do just that, handing the No. 29 Texas Tech Red Raiders a 7-0 sweep.

“(Texas Tech) beat us last year at their place, so to come out and beat them … is an effort the team should feel really good about,” interim head coach Bruce Berque said.

Yuya Ito, who ranks No. 9 in singles, took the Longhorns’ lead to two after he defeated Tommy Mylnikov, 6-1, 6-1, in a dominant performance that impressed Berque.

“Last year I was sick against them so I couldn’t play,” Ito said. “I think everyone else was up for revenge, everyone was pumped up … we got on top of them and kept the momentum going.”

Rodrigo Banzer and Huang would make quick work of their matches as well, going 18-6 in games combined to secure the win for Texas. The Longhorns would continue to flex their muscle in the later matches, winning long matches, with Sigsgaard and Scott going to a third-set tiebreaker before Scott capped off the clean sweep for Texas.

Berque was proud of his team’s performance late in the night.

“We showed a lot of pride in general on every court,” Berque said. “Everyone fought hard to win their match even after the team match was determined and I thought that was a positive.”

Texas caps off its season at the Texas Tennis Center on Sunday against the No. 6 Baylor Bears on Senior Day. The Longhorns will honor the five seniors on the team, which will create a large turnover next season. Banzer, Markes, Scott and Telles, as well as Johnny Goodwin, will be honored when the Bears enter Austin for the last home match of the year.

“Not only did we get the win but we played well and competed really hard so we set the tone for how we want to play these conference matches,” Berque said. “We’re definitely going to have to compete really hard (against Baylor). … As far as senior day, we have a big senior class (five). … What I’ve been most happy with is the way they’ve stepped up and matured over the years.”