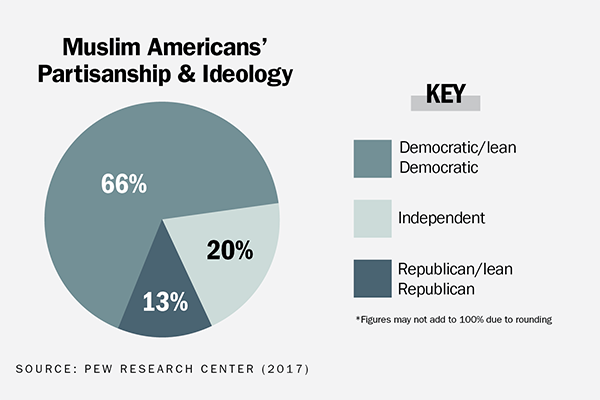 When the topic of Republican Muslims came up in a majority-Muslim group chat of Pakistani UT students, multiple Muslims responded by calling Republican Muslims “Shayateen,” Islam’s version of the devil. Another reply said those Muslims need to be kicked out of the country.

Muslims who hold conservative political views feel isolated from the liberal-leaning Muslim community, according to UT Muslim students. This has caused them to be wary of sharing their political views with their Muslim peers.

“I don’t want to be called the devil by my own Muslim friends,” said Aman, who asked to be identified by only his first name out of fear of backlash. “It’s scary to put yourself out there because people automatically connect you to Trump and Islamophobia.”

People may be scared to express conservative views due to President Trump’s rhetoric, regardless of their race, said history professor Alberto Martinez.

“(Conservatives) are literally hiding out of a kind of fear, even though they might even be in the majority,” Martinez said. “If anyone were to support Trump, then you risk being called sexist, racist, homophobic, Islamophobic, etc.”

Out of the 128 Muslim candidates in the 2018 midterm elections, only three ran as Republican versus the 33 that ran as Democratic, according to Jetpac, an organization dedicated to increasing American Muslim political involvement. The rest ran as nonpartisan.

“Trump has, more than any other politician, very explicitly gone after Muslims,” Aman said. “(Many Muslims think), ‘How could you support a man who is using your religion as a tool to advances on political agenda?’”

Aman said a large reason he did not vote for Trump was due to his Islamophobic policies and rhetoric.

“When you try and side with a party … that’s where you get into propaganda,” Aman said. “The Muslim ban and the Islamophobia are being manufactured by the Republican Party. I can’t agree with that as a Muslim.”

However, biology senior Ali Shah said Trump’s rhetoric should not be considered as seriously as his actions. Shah identifies as a libertarian who has right-leaning positions.

“You have to realize some things he says are just out of ignorance,” Shah said. “It doesn’t mean anything.”

Petroleum engineering senior Saad Awan said while he does not agree with the Republican Party’s Islamophobic rhetoric, he can understand where they are coming from. Awan said he is left-leaning but admires aspects of conservative ideologies.

“(Islamophobic rhetoric is) also not their fault most of the time, because there is a huge part of Trump supporters who are uneducated about Islam,” Awan said.

Sophia Shams, a government and economics sophomore, said she doesn’t really tell a lot of people that she holds conservative ideologies because of the relationship between Muslims and the Trump administration.

“Especially being on the UT campus, it’s kind of weird because I know a lot of people expect me to be liberal since I’m Muslim and a woman, and that kind of fits the narrative,” Shams said.