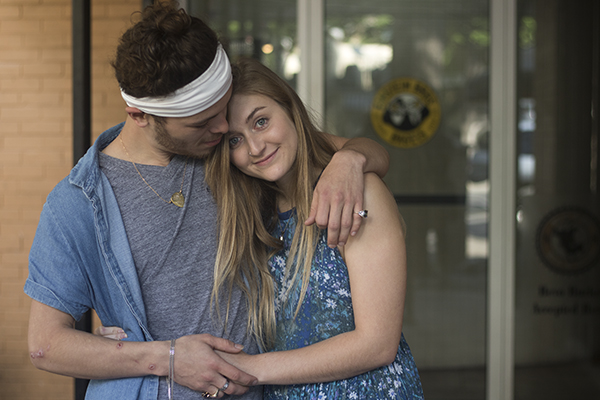 Brianna McKinney and Israel Uballe didn’t know bagels and a Facebook post could lead to love until last spring.

Recently celebrating their one year anniversary, the couple has been together since nursing senior McKinney and Uballe, 22, met last year at Einstein Bros. Bagels. They later relinked through UT Missed Connections, a Facebook page for students to share their experience of an encounter they wished was longer.

McKinney used to work at Einstein’s, but their lives never overlapped until last January when she returned while Uballe was working. She said she recognized his attractiveness from the start but didn’t interact with him.

“I would come to Einstein’s because I like the food and people, but I was looking for him,” McKinney said.

It wasn’t until McKinney returned a couple months later when they saw each other again. Since closing time was approaching, Uballe said Einstein’s offered free bagels if there weren’t many customers. As the only employee present, he assembled a bagful of bagels and put cream cheese in individual containers for McKinney.

This second interaction led her to posting on the Facebook page, in which she thanked Uballe for his kindness, complimented his appearance and offered free Tiff’s Treats cookies in return, since she worked there at the time.

Since Uballe wasn’t in the Facebook group, he didn’t see the post until his coworkers and returning customers showed him.

“I had this big, cheesy smile,” Uballe said. “I remember once I was reading it, (my coworkers) were seeing my reaction. They were like, ‘You better contact her.’”

When Uballe messaged her on Facebook, McKinney said she didn’t initially recognize him.

“This was two weeks after I made the post, which I had forgotten about,” McKinney said. “I never expected to hear anything back.”

In his message, he expressed interest in not only free cookies but also a date. Uballe surprised McKinney at Tiff’s the next day for his cookies, and they shared an awkward hug.

“It was the perfect movie awkwardness, but she was the only thing I focused on,” Uballe said. “That first instance at Tiff’s sealed everything for me.”

Later, they hung out at a get-together hosted by friends of Uballe’s, where they talked and immediately felt a strong connection.

“It was bizarre because (n)either of us have felt that strongly so quickly,” McKinney said. “It flowed like we’d known each other already.”

Even Taran Gallaher, Uballe’s friend and the host of the get-together, said he was surprised to see them still together a month after first hanging out.

“I’ve always known Izzy (Israel) not to have long-term relationships,” Gallaher said. “I’ve seen the relationship transform into something real.”

The two had their official date March 30, and for their one year anniversary this past weekend, they went to San Antonio.

Despite everything, the two agreed timing shaped their relationship. McKinney said she wouldn’t want it any differently because they’re still together and in love.

“I feel like the only reason (things are) the way they are is because of how we met,” McKinney said. “I wouldn’t change a thing.”