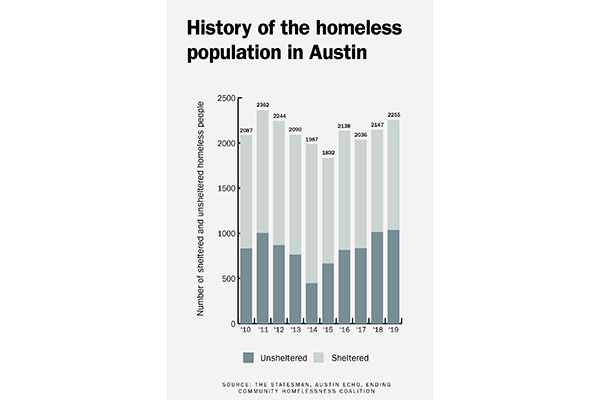 Three months ago, more than 500 volunteers scoured the city before dawn to count every single individual experiencing homelessness.

The number of people experiencing homelessness in Austin increased by 108 individuals since last year to a total of 2,255 people, according to an Ending Community Homelessness Coalition report released last Tuesday. This is the highest recorded population since 2011 and is the second year in a row the homeless population increased by 5%.

Greg McCormack, executive director of Front Steps, a program meant to address the needs of Austin’s homeless community, said while the increase is not surprising, it is not acceptable.

Front Steps is a nonprofit organization that manages the Austin Resource Center for the Homeless, the primary men’s overnight shelter in Austin. Currently, the facility has 190 beds and sleeping mats for the homeless. Only 30% to 40% of individuals staying at the center are assigned a case manager, who provides support and resources for finding housing and an income through weekly planning meetings.

In late January, Austin City Council voted to reduce the number of sleeping mats by 60 and in turn, provide case management to all remaining 130 residents.

“What we’ve seen in the past is that people engaged in case management, the likelihood of them getting into a housing situation is far greater than going in on their own,” McCormack said.

City Council member Kathie Tovo, who represents District 9, said it is not uncommon for individuals experiencing homelessness go to downtown areas because of the available services. Tovo has helped with the count for the past four years.

“It’s really important that count be as accurate as possible so we have a real understanding of how many individuals we have who are experiencing homelessness and, to some extent, why,” Tovo said.

The number of homeless veterans and youth decreased by 15 and 25 percent, respectively, since 2018. Tovo said the two groups were targeted by the city as priorities, and the reduction in their numbers is a success.

Ryan Chandler, a journalism and government sophomore who worked at The Daily Texan last semster, founded UT’s Horns for the Homeless last year to deliver care packages. These packages contain essential hygiene products and food to the homeless in places, such as the Drag, that experienced the highest increase this year.

“Nobody chooses to be homeless,” Chandler said. “So if we can just do our part in recognizing them … we can make their lives and our lives just a little bit better.”