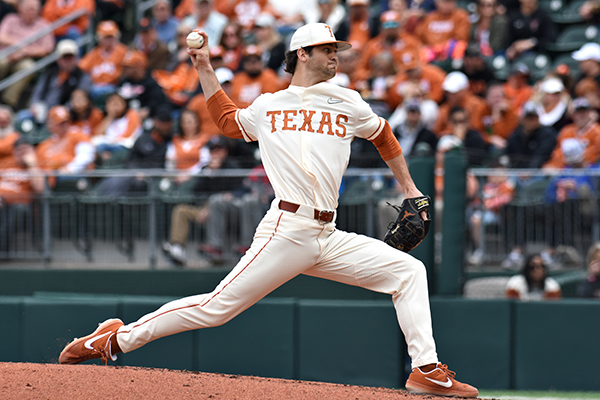 Waco, Texas, looked a lot like Austin early Saturday afternoon, with thunder and lightning pummeling the city. The Longhorns were supposed to face the Baylor Bears at 3:05 p.m., but four game delays kept the Longhorns in the locker room until 5:45 p.m.

With any game delay, one team is susceptible to mistakes with poor conditions. For the first five innings, it looked like it was going to be Texas. However, a two-inning rally late in the game gave Texas a 8-6 win over Baylor, tying the series at one game apiece going into Sunday.

Texas head coach David Pierce said he was happy with the way Baylor’s staff monitored the weather and kept the Longhorns informed.

“We had a delay, then we had another delay,” Pierce said in a postgame interview with Texas Sports. “It’s tough, but our kids handled it well. They handled a lot well today and I’m really proud of them.”

Texas’ defense allowed Baylor to take an early lead in the bottom of the first inning and allowed four hits, three runs and one error. Pitcher Blair Henley said he knew that after the opening moments, he would have to step up and help his team.

“I had to make an adjustment, (Baylor’s batters are) really good hitters and, you know, I wasn’t throwing the ball exactly where I wanted to,” Henley said. “So the second and throughout the game I just kinda had a more conviction with my pitches and with my fastballs down and away.”

Baylor scored two more runs in the fifth inning to put the score at 5-0, but Texas eventually found its footing in the top of the sixth and seventh innings.

Center fielder Duke Ellis began the sixth-inning rally with a single up the middle. Right fielder Austin Todd fed off his momentum and homered into left field, making the score 2-0. One walk and one hit later, designated hitter Peter Geib got his second hit of the season to load the bases.

The Longhorns tallied their last run of the inning with a single through the left side by second baseman Lance Ford.

“They were in a position where they could’ve said, ‘This is not our day,’ or whatever, you know they didn’t,” Pierce said. “I thought Blair gutted it up. He showed true ownership of pitching the baseball today and he gave us seven innings when he didn’t look like he was going to get out of the fourth inning. And then, just so many gritty at-bats and a big home run by Austin gets overlooked. This is a great team win. We needed this win big time.”

In the seventh Inning, the Longhorns took the lead for the first time in the game, 7-5.

With an even series going into Sunday, Pierce said he knows Sunday’s game will be tough but is confident in his team's abilities.

“Winning a Sunday on the road against a very quality team, especially the way tonight went, you know, comeback win,” Pierce said. “We just got to be gritty again tomorrow and get a good outing from (pitcher) Coy (Cobb). We got guys in the bullpen ready to go so I like our chances.”