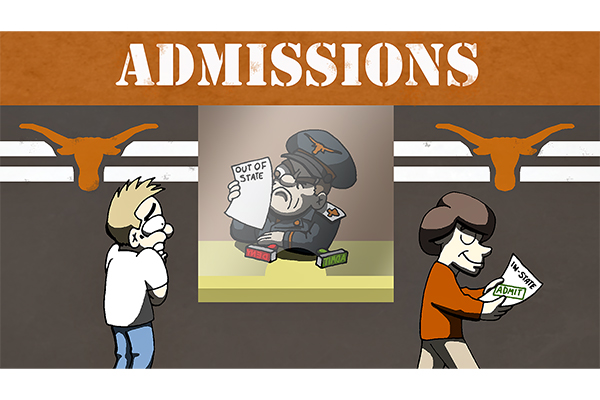 Under state law, 90% of UT-Austin’s incoming freshman class must be Texas residents.

Senate Bill 175, passed in 2009, specifies that in-state applicants must make up 75% of all admission offers for publicly funded universities. Out-of-state and in-state students alike have questioned the policy and its effects on UT’s student make up.

In a written statement, executive director of Admissions Miguel Wasielewski said UT’s admission rate for first-time applicants from Texas was 45% in 2018, excluding international and Path to Admission through Co-Enrollment students. Of out-of-state applicants, only 24% were admitted.

Both in and out-of-state students have expressed their conflicting views on the legislation and University policy. Ethan Davis, a music performance freshman from Columbus, Ohio, said many people from around the country would like to attend UT but can’t as a result of this policy.

Dylan Zisman, a biology freshman from Houston, said UT should accept a higher number of out-of-state students, but he recognizes the negative implications such a change could have on others.

“It would be a good idea to raise the percentage of out-of-state students, although in-state parents would complain,” Zisman said. “I have good friends from out-of-state, I see these people as genuinely good kids and I want to see more people like them.”

The rate of admission for students is also influenced by which college they apply to within UT, Zisman said.

“I think that some schools are more tightly packed with in-state students than others so I think when out-of-state students apply to those schools there are fewer openings,” Zisman said.

Wasielewski said in a written statement that the processes in place focus both on access and success. This approach ensures students are able to get access to the classes they need to graduate on time.

After all of these factors influencing admissions rates, Zisman is still frustrated and believe that it takes more effort to apply as an out-of-state student than an in-state student.

“I think that if someone from out-of-state is trying to apply here to get out of their state, it should ring a bell with the admissions staff,” Zisman said.

Wasielewski has said that he is aware of all of these concerns and that the admissions office tries their best to review each application holistically and look over it by two different readers.

Certain students, such as Jake Herman, a Plan II and journalism freshman from Maryland, still believe in the process.

“I think anyone can (get into) UT if they have the right study habits and dedication to school,” Herman said.