‘Game of Thrones’ cultural phenomenon comes to an end 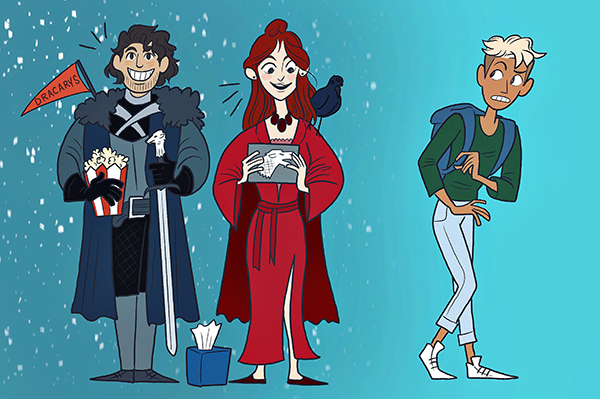 While some haven’t watched it, most have heard about it.

The eighth and final season of “Game of Thrones” will premiere on April 14. Since the release of the first volume of the book series, “A Song of Ice and Fire,” by George R. R. Martin in 1996, a dedicated fanbase has emerged. The season 7 finale attracted a record 12.1 million viewers, further solidifying its status as a cultural icon.

Lesley Willard, a radio-television-film doctoral candidate, researches “Game of Thrones” spoiler culture and fan theory podcasts. She said part of the show’s appeal is the idea that people like to latch onto one cultural object.

“There are a couple big hits, you know, like ‘Walking Dead’ or ‘Stranger Things’ that most people have seen,” Willard said. “I think people like to be a part of a larger cultural conversation about a media text and ‘GOT’ provides that.”

Not everyone has hopped on the “Game of Thrones” bandwagon, including biochemistry sophomore Channing Hamilton. In addition to feeling pressure from her friends to watch the show, Hamilton said “Game of Thrones” advertisements and promotions are everywhere.

“I’m just always hearing about it and since I don’t take part in it, it’s kind of like, ‘Okay, here’s another one,’” Hamilton said. “It’s just always in your face.”

History freshman Justin Chasalow said he read the books  before watching the show. He considers “Game of Thrones” to be a craze right now and said he has not experienced this much anticipation and hype around another TV show. Fearing his excitement will breed disappointment, Chasalow said he hopes this isn’t the case.

Chasalow got his friends interested in the show and said he watched the entire series again with them.

“There’s a lot of me pausing the TV and being like, ‘Okay, you understand what happened there, right? (Do) I need to explain this? Do you understand this?’” Chasalow said.

Design freshman Meredith Cambis said a reason for the show’s hype is fans seeking television shows with a continuous storyline. Cambis said “Game of Thrones” is like a long movie but better because viewers get invested in the characters from spending so much time with them.

“You kind of have to watch it and I feel like if you don’t watch it, you’re missing out on this huge part of pop culture,” Cambis said. “I would recommend anybody watch the show if they want something that’s very well written and has a lot of interesting thoughts and philosophies.”