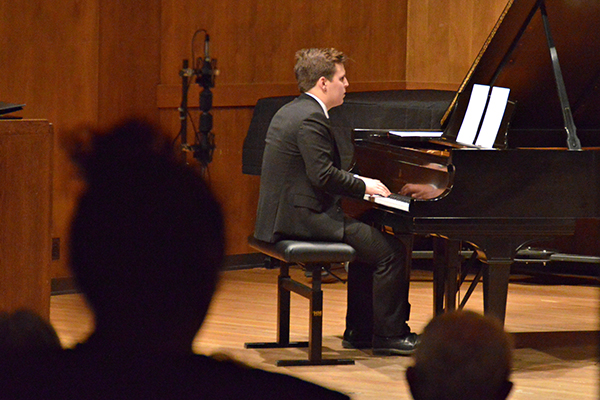 Locked in practice rooms and bent over their music, music students have prepared all semester for their spring recitals.

Music majors are required to perform recitals their junior or senior year to demonstrate their proficiency and exhibit personal growth over the semesters in their area of study. The students perfect their music over the course of the semester with the help of a professor before the thirty minute or hourlong performance open to anyone.

Jazz performance senior Chase Ozment said he would like to see more students in the audience.

“I got to show what music I’ve been digging into like salsa, rumba and Latin American styles,” Ozment, who focuses in drums, said. “(My recital) went pretty dang well.”

Ozment said his favorite part of his own recital was hitting the drums hard because of the restraint jazz drummers typically have to use. He also said he was excited to play for a live audience.

“The best part about being a musician is getting to present to a crowd and make connections,” Ozment said. “I just want to influence people.”

Performing in front of a crowd can be intimidating for some, but Ozment said he’d rather have a big crowd than a small one.

“It’s good to feed off the energy of a larger crowd, and that helps you gauge how you’re doing,” Ozment said. “It’s easier to get them going and excited about what you’re playing.”

Ozment encourages students to come to recitals to support jazz and local musicians.

“If you go to a show, feel free to stand, move, make noise,” Ozment said. “One of my favorite things is to see people move at shows. It makes me very happy.”

Jazz composition with an emphasis in piano junior Thomas Wenglinski performed a mixture of original compositions and classic jazz tunes at his recital.

“I’m most excited for getting that stage and sharing it with musicians like the ones I’m playing with,” Wenglinski said. “It’s your opportunity to really say something as a student at the University.”

Wenglinski said the purpose of having a recital is to emphasize the effects an audience has on performers.

“Honestly, if there are 10 people there, but they’re really into it, it’s fine with me,” Wenglinski said. “However many people are there, I’d just like everyone to be valuing it.”

Wenglinski said no two recitals are exactly alike, and his is one of many happening this semester.

“If anyone has a friend who’s a junior or a senior and a music major that hasn’t had their recital yet this semester, I would definitely encourage them to check it out,” Wenglinski said. “It’s really an opportunity to support them.”

Vocal recitals perform at least one song in all languages taught, including Italian, German, French and English. Follis said he is excited for the audience to hear everything he’s been working on.

“That’s how we are vulnerable, and that’s how we express ourselves is through the performing arts,” Follis said. “I don’t know why people wouldn’t want to go see a free recital and get to see people show what they do best.”