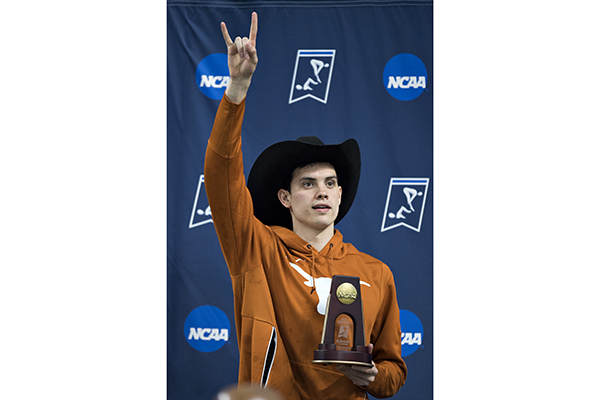 Finishing fifth in the 100-yard backstroke, economics senior Ryan Harty helped his team take second place at the 2019 NCAA Division 1 Men’s Swimming and Diving Championship. Less than one week later, he was on probation.

A Travis County judge gave Harty deferred adjudication last Wednesday for a 2017 trespassing charge. Harty will have to perform 50 hours of community service, agree to random drug testing, pay a $200 fine and serve 14 months of probation. After Harty has fulfilled the requirements and served probation, the misdemeanor will be dropped from his record.

According to the Associated Press, police arrested Harty in August 2017 after Harty entered a woman’s house shirtless. The woman fled to a neighbor’s home, while police used a Taser to apprehend and arrest Harty. A friend of Harty’s told police he was under the influence of hallucinogens at the time of arrest, according to AP.

Texas Athletics spokesperson John Bianco said in an email that the department was made aware of the situation following last Wednesday’s ruling.

“Now that we have been informed, we are gathering facts, reviewing the situation and determining any action that will be taken,” Bianco said in an email.

Attorney Bruce Fox, who represented Harty, said while the deferred adjudication means Harty is not convicted of trespassing, he was hoping to have all charges dropped. Fox and Harty tried to work through a restorative justice program, where the accused and victim agree to meet face-to-face to discuss the wrongdoing, resulting in dismissal of the charges.

“That didn’t happen in this case because the person whose space was violated, entirely within their rights, didn’t agree to that resolution of the case,” Fox said.

University spokesperson J.B. Bird said in an email that Texas Athletics is reviewing the incident and is prohibited under federal law from commenting on disciplinary actions toward any
individual student.