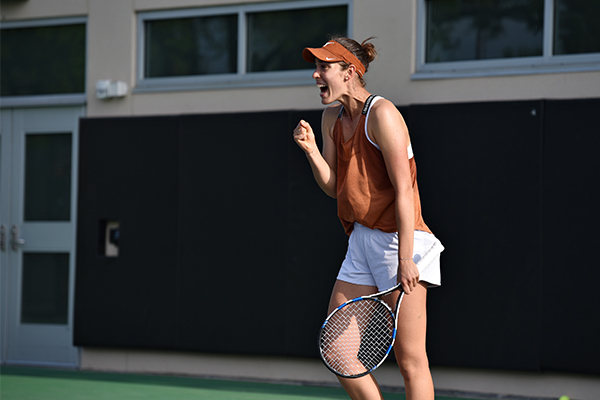 The Longhorns inched closer to a Big 12 title and secured a special milestone for head coach Howard Joffe on Friday.

With just one game between Texas and a share of the conference championship, the afternoon match against Iowa State was more important than others.

“Today, the team learned how close you can be letting these opportunities slip away,” Joffe said.

The underdog Cyclones — who have won just a single conference game — surprised the Longhorns by claiming the doubles point. The Cyclones also lead three of the six singles matches through the first set.

In spite of the early challenge, Texas countered rapidly with a 4-3 victory overall.

Junior Anna Turati continued her dominance with her 14th straight win after racing to victory in straight sets against Regina Espinolda 6-1, 6-0.

Junior Petra Granic then gave Texas its first lead with another win in straight sets. Granic defeated Ekaterina Grib 6-3, 6-1, which started to give the Longhorns momentum to pull away.

However, the Cyclones didn’t fold in the face of Texas’ surge.

Iowa State’s Ekaterina Repina earned the victory against sophomore Bojana Markovic in three sets. It was a close match throughout as Markovic and Repina split their first two sets. Repina won the first set, 4-6, while Markovic won the ensuing set 6-0. Repina ultimately won the third set, 6-0, tying the match at 2-2 overall.

This marked a crucial moment that would serve as the turning point for whichever took advantage. It could propel Iowa State to a monumental upset or fulfill another championship for Texas. In this meeting, the cards favored the Longhorns.

Sophomore Fernanda Labrana rallied from a loss in her first set resulting in 6-3, 6-0 win against Annabella Bonadonna. With the win, Texas regained the lead and then had an opportunity to finish the match.

Freshman Tijana Spasojevic not only cliched the Longhorns’ victory, but showed why she is one of the Longhorns most promising prospects.

“I was very impressed with the way she was able to come back” Joffe said. “Hopefully this will build some residual confidence.”

The win was number 200 for Joffe, who has guided the Longhorns to two Sweet Sixteens during his tenure at Texas.

“To be honest, I had no idea about the 200th win until after the match,” Joffe said. “However, I’ll never forget it after today.”