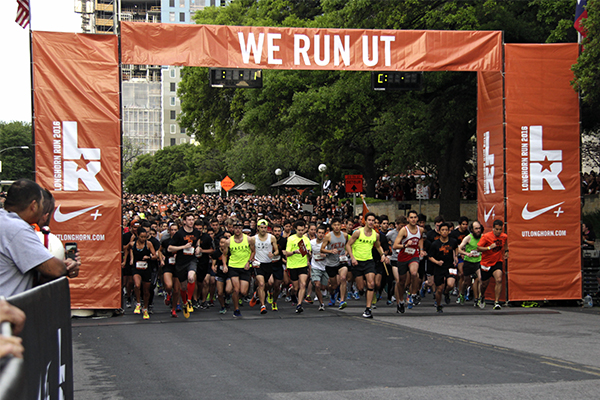 Over 4,000 runners gathered on campus early Saturday morning to participate in the annual Longhorn Run, but threatening weather conditions threw the race off course.

Last weekend, the Austin American-Statesman canceled their annual Capitol 10K Race because of weather conditions. In previous years, the Longhorn Run has taken place during rainy conditions, but this is the first time in nine years it has been canceled because of lightning and thunder, race director Cecilia Lopez Cardenas said.

“Our team had been monitoring the weather throughout the week, and we knew the weather conditions could be threatening,” Lopez Cardenas said. “We knew rain was always in the forecast, and we would have the run rain or shine, but it was a matter of if there would be lightning or thunder.”

Event staff gathered hours before the race to set up and monitor the weather, Lopez Cardenas said. “We gathered pretty much hourly from as early as 4 a.m.,” Lopez Cardenas said. “The (forecasts) we looked at said rain would likely hit the area, but there were no threatening weather conditions in place at the time, so we thought we would be able to have the race on schedule.”

The 10K runners began the race at 8 a.m. but were led back to Gregory Gymnasium after signs of threatening weather conditions began to appear, Lopez Cardenas said.

“About two miles in, we veered off the course and went back to campus to Speedway,” biology senior Jade Teetsel said. “The whole time I was thinking, ‘Did I accidentally do the 5K course?’ I was just really confused.”

“I started looking at my email and the Longhorn Run Twitter for updates,” Sames said. “They didn’t post anything for a while, so I just left because everything was unclear. The volunteers and the event staff didn’t give us much instruction.”

Lopez Cardenas said they considered delaying the race, but City permitting would not allow them to start the run any later than 8:45 a.m.

“Unfortunately, the conditions were not clear by then and continued to be a threat,” Lopez Cardenas said. “We just could not afford to put our runners at risk and at that point, we made the decision to cancel the race and post-race celebration.”

The cost of participating in the 5K was $35 and the 10K was $40. When signing up for the race, Lopez Cardenas said the strict no refund policy is made clear to participants.

“No matter how much sponsor support we have, we rely on the registration fees to hold the race,” Lopez Cardenas said. “Because of the City permitting, law enforcement, all of the various aspects it takes to produce the race, these events aren’t possible to reschedule.”

Teetsel said while it is frustrating to have the two races canceled on back-to-back weekends, she appreciates event staff putting the safety of the runners first.

“I can only imagine how much planning goes into (the race) logistically and financially and how organized you have to be while making sure everyone is safe,” Teetsel said. “As much as it sucks for the runners, we just had to show up.”