No. 1 Texas clinches Big 12 regular season title with win over No. 21 Oklahoma 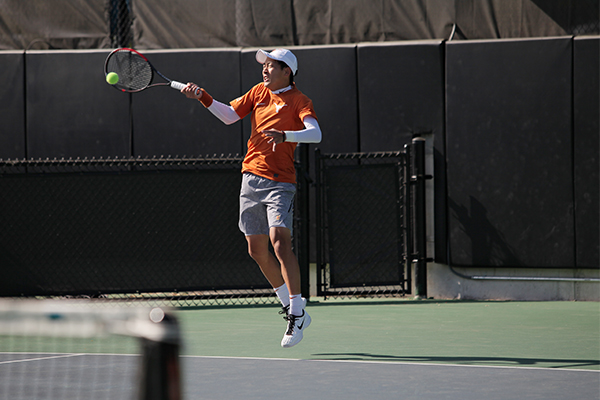 In an April that has seen the No. 1 Longhorns down then-10th ranked TCU in Fort Worth and escape an upset in Stillwater against No. 26 Oklahoma State, it’s only fitting that the last match of the season — a grudge match across the Red River border — would clinch the Longhorns’ fifth outright Big 12 regular season championship and a perfect Big 12 record.

Wrapping up the season, the match started with Texas finally ridding its doubles point woe by winning the point with victories from Colin Markes/Leonardo Telles and Chih Chi Huang/Yuya Ito. The doubles point was the first for Texas since its March 29 sweep of No. 29 Texas Tech.

“It was really important (to get the doubles point),” interim head coach Bruce Berque said. “That gave the guys some confidence heading into singles. … Our number two and three teams really stepped up, they’d both lost the previous match … but they stepped up and stayed strong.”

The doubles point proved to be crucial, as Oklahoma’s No. 67 Alex Bakshi and Stefano Tsorotiotis grabbed wins and a couple of points for the Sooners. Texas’ No. 8 Christian Sigsgaard’s match against the Sooners’ No. 31 Spencer Papa became a moot point after No. 50 Harrison Scott, Markes and No. 7 Ito clinched quick wins to secure the match for Texas.

Scott particularly dispatched Oklahoma’s Ferran Calvo 6-2, 6-4, in a performance that Berque was particularly proud of.

Despite winning the doubles point, Scott and Sigsgaard found themselves on the losing end of their match against Oklahoma’s Bakshi and Tsorotiotis. But Berque wasn’t worried, stressing the speed of doubles matches as well as his confidence in his team.

“Doubles is so day-to-day,” Berque said. “I think our doubles is going to be right back on track after this one. … That was definitely a big point for us especially on the road.”

The top-ranked Longhorns head to Lawrence, Kansas, to defend last year’s Big 12 Championship, which Texas swept in front of the Austin faithful, winning both the men’s and women’s conference titles.

The trip up to Kansas doesn’t bother Berque, who sees it as another road trip for the streaking Longhorns.

Texas locked up the No. 1 seed in the tournament with the win, guaranteeing them a bye in the first round and a match next Saturday against the winner of what is likely to be a Texas Tech/Oklahoma matchup, both of which they’ve faced within the last three weeks.