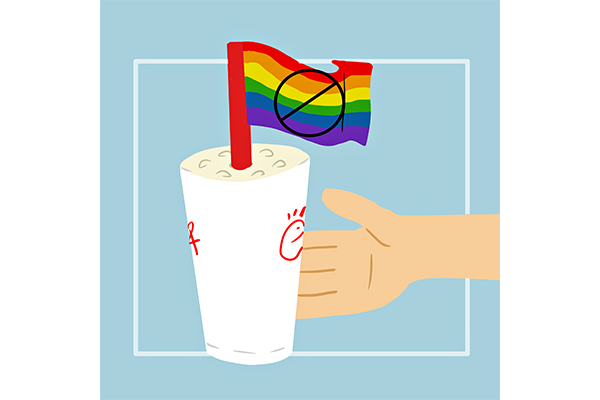 Between bites of their Chick-n-Minis and waffle fries, some students struggle with Chick-fil-A’s anti-LGBTQ affiliations.

A study by ThinkProgress from March 20 revealed the Chick-fil-A Foundation in 2017 donated $1.8 million to three groups with a history of anti-LGBTQ discrimination. Many students have condemned the company’s actions, which led them to rethink their support for Chick-fil-A.

Of the dining selections on campus, there are two Chick-fil-As — one in the Texas Union and another in the Student Activity Center. University Unions Executive Director Mulugeta Ferede said they have little to do with Chick-fil-A being on campus.

“We’re very much engaged with our students and incorporate that feedback into our food service on campus, but we haven’t had any feedback or complaint since the news has come out,” Ferede said.

Levinson recognizes this is an uphill battle for the queer community, but she said every source of pushback can help.

“I don’t think (Chick-fil-A is) going to change their ways no matter how many schools take them of out their university meal plans,” Levinson said. “However, the more we can stop funds going to those organizations they support, the better.”

While some students disagree with Chick-fil-A’s values, others embrace the findings. Psychology junior Matthew Myers is not only tolerant of Chick-fil-A running its business on campus, but also said he would be opposed to its removal.

“I am going to continue eating Chick-fil-A,” Myers said. “If anything, potentially banning Chick-fil-A is discriminating against my Christian values.”

Molly Bartell, art history freshman and member of the LGBTQ community, said she will still eat Chick-fil-A even though she does not agree with their beliefs.

While students like Bartell may not embrace Chick-fil-A’s values, some still choose to eat there because of its convenience and flavor. Biochemistry sophomore Chantel Blakes said those are reasons she continues to eat Chick-fil-A.

“Obviously, it sucks that in this day and age people still find (LGBTQ) wrong,” Blakes said. “But this doesn’t really change my relationship with Chick-fil-A. I’ll still eat it. It’s delicious food, and it’s one of the very few options on campus that I actually like.”