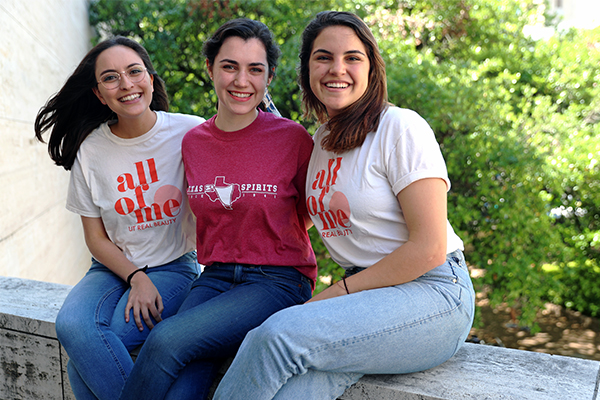 “The most incredible thing was learning her story, and every time I thought I knew everything, someone else would say, ‘Oh, she was also involved in this,’” Berno said.

After speaking with University officials, Berno decided to create an endowment in Zeitler’s name for Texas Real Beauty, an organization that aims to tackle detrimental beauty standards and promote self-love. Zeitler’s mother chose Texas Real Beauty because Zeitler directed the campaign in 2015.

“Her mom felt like it’s a message Abz needed to hear again,” Berno said. “No matter what, your story is beautiful and worth sharing.”

The donation will be invested in UT’s larger endowment, and each year, the returns will be given to the campaign. In order to reach the $25,000 minimum, Spirits created a Hornraiser and raised over $18,000.

“(The money raised is) a testament to who she was. Abz was truly one of the best that our University had to offer,” Berno said. “Her story was so easy to share.”

After beginning as an extension of Texas Spirits and Texas Sweethearts in 2014, Texas Real Beauty became an official, standalone organization in fall 2018. Campaign co-director Daniela Cos said the funding will help bring in speakers for future events.

“The amazing part of this endowment is (the organization) will be funded long after we’re gone and the same things we’re striving to do now will still be impacting campus,” Cos, an international relations and global studies and Italian junior, said.

Campaign co-director Sydney Arceneaux said Zeitler’s connection to the organization was apparent in her dedication to helping start the project.

“Even more than that, the message we’re spreading is focused on trying to help people on their journey of finding themselves,” Arceneaux, a Plan II and chemistry junior, said. “Mental health is a really important aspect of that.”

Berno said Zeitler was the victim of trauma while interning in developing countries, and hopes the endowment will raise awareness and provide resources to others who may be having similar experiences.

Laura Michie, cellular and molecular biology senior and Zeitler’s friend in Spirits, hopes the endowment will serve as a way to preserve the legacy of kindness and involvement Zeitler left behind.

“I can’t think of a single person who pushed her friends and her community to be better (like Abz did),” Michie said. “She wanted to change the University and make an impact.”

Berno said the endowment will provide a lasting and positive impact on the University.

“It’s really awesome that someone who was so passionate about positive change and making a difference in the world gets to have something that makes her voice continue beyond all of ours,” Berno said.