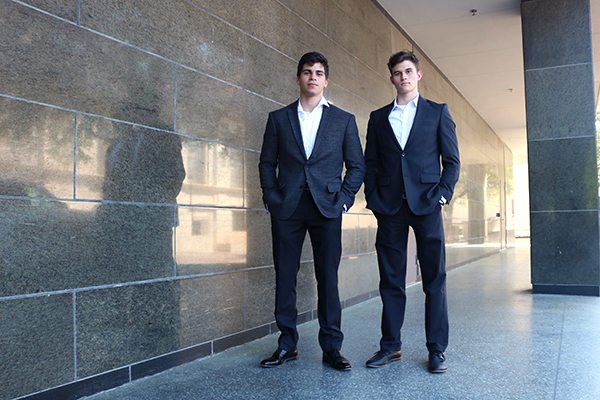 With the popularity of Juul e-cigarettes, UT students have bought into an addicting trend marking its presence on college campuses. Two students have set out to curtail nicotine addiction by creating and selling nicotine-free Juul pods through their company, EnAIRgy.

Juuls, devices marketed as a cigarette alternative, use nicotine-filled pods. According to Juul’s website, each pod includes the nicotine equivalent of a pack of cigarettes. While many students enjoy Juuls, management sophomore Travis Long and finance sophomore Dylan Rowling said student health should come first.

EnAIRgy, founded in January, began as an idea for a class project that was denied by Rowling’s teammates.

Students who vape using EnAIRgy pods breathe in caffeine and vitamin B12 instead of nicotine. Rowling said he wants to curb “the nicotine epidemic” while providing a way for students to achieve higher energy levels.

“I’m not going to bash someone for liking nicotine, but it’s just not (healthy),” Rowling said. “(Many) people Juul because of the social stigma or because other people Juul. (EnAIRgy) provides a healthier alternative.”

The pods, sold in packs of four for $12.99, can be found in eight stores around campus, where they compete with Juul pods and other energy products for sale. Dobie Market manager Adil Maknojia said EnAIRgy’s biggest challenge is competing against brands such as Monster and Red Bull.

“Energy is one of the top-performing categories in the grocery industry,” said Maknojia, who has worked at Dobie for eight years. “Many (consumers) are not aware that there’s a new product in the market where you can puff and get caffeine out of a pod, but I do see a lot of the young generation eventually adopting this in the future.”

Recently, EnAIRgy secured a deal with a regional distributor, Amia Trade, that will place their products on the shelves of 90 stores in and around Austin. Long said EnAIRgy will continue to tweak their recipe and release new flavors to meet demand.

“In the coming weeks, we’ll be rolling out pink lemonade, mango and blueberry flavors. We’re also increasing the amount of propylene glycol that’s in (each pod), which increases the throat hit that people feel associated with nicotine,” Long said. “We want our pod induce a similar feeling to what you get when you hit a nicotine pod.”

EnAIRgy is not currently recognizing profit, but Long and Rowling said they expect their work to pay off over time. Long said continued growth is key to their success.

“We want to be into a network of about 5,000 convenience stores in the next 365 days, beyond Austin,” Long said. “Now we’re getting a local market, and (being in) 90 more stores will give us a regional market. We’re going to expand nationally after that.”