UT’s safety pocket guide is too little, too late 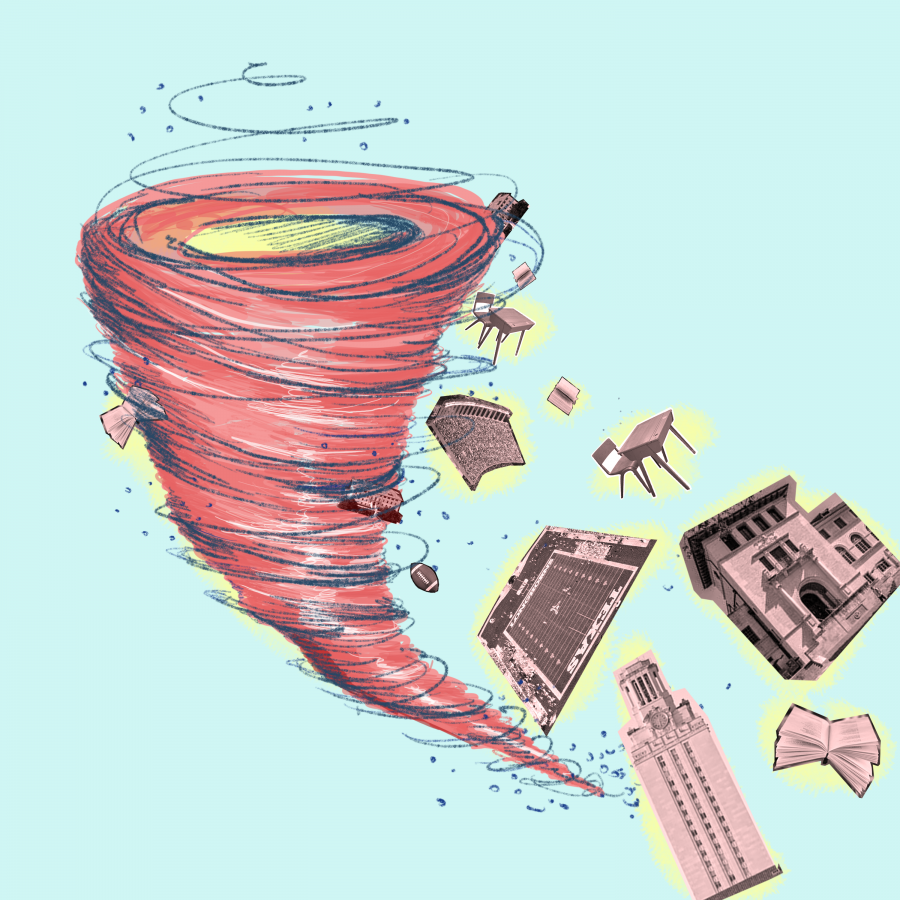 Editor's note: An earlier version of this column mistated the tornadoe watch as a tornado warning, as well as not clarifying that the guide in question refered only to off-campus incidents. The column has been updated to reflect these changes.

It’s a stormy day, but you don’t think much of it — until your suitemate pops into your room to tell you there’s a tornado watch in effect. “Did UT send an alert?” you ask. “No,” they say. “My mom texted me.” You quickly check your phone for messages from the University. Nothing. You scan UT Police Department’s Twitter but find only a quoted tweet advising students to be ready to move to their “safe space” if “threatening weather conditions approach.”

But where is your safe space? Should you stay in your dorm building? Go to a different, safer building? A building with a basement? Which buildings have basements? And what constitutes as “threatening weather conditions?” The weather now? What do you do?

On April 6, there was a tornado watch in the Austin area. Political communications sophomore Amaya French said she was inspired to tweet about tornado safety tips because many of her friends and followers expressed uncertainty about what to do.

“I was going through Twitter and talking to some friends, and I saw that a lot of people were concerned because they didn’t know what to do or where to go,” French said. “Many of them weren’t from Texas, so they’d never been in a tornado before.”

French’s Twitter thread was retweeted 80 times and has over 250 likes.

“I don’t think UT was prepared for the tornado warning,” French said. “I think if there were an actual emergency, an actual tornado, there would be a lot of chaos.”

French said she compiled her information by looking through UT’s lengthy emergency preparedness handbooks online and other universities’ resources for emergencies. However, if there was a weather emergency, students would have little time to leaf through cumbersome documents and conduct research.

“If there was an emergency, there wouldn’t be a way or time to help anyone,” French said.

French also expressed frustration that the only concrete plan she could find for tornado safety was for “employees, tenants and guests,” and only applied for off-campus events. The plan advises them to proceed to the basement levels of an off-campus parking garage.

“Their priority should be students, bottom line, not faculty,” French said.

However, the pocket guide contains only a few pages on what to do in severe weather, advising students to go to the lowest floor, cover their heads and watch for updates from UTPD.

Frankly, that’s not enough. Students need to know if some buildings are safer for students to relocate to, and if so, which ones.

Director of Emergency Preparedness Jonathan Robb said there is no information directing students to safer buildings, because “there isn’t really any specific structural design on campus that is going to benefit you more than any other.”

However, he also said there are clear benefits to seeking shelter in buildings with basements and underground structures, such as the off-campus parking garages.

“If your building has a basement, that is where we recommend you shelter,”  Robb said.

Students need a list of these buildings. Students also need to know what weather conditions indicate a natural disaster is coming and if they should move to designated safe areas. UT Emergency Preparedness should include this information in their pocket guide.

“I wish they would have more concrete plans in place,” French said. “Everyone on campus needs to feel prepared and know what they need to do so that they can have peace of mind.”

Students deserve to feel prepared and safe on campus, regardless of the weather. It’s UT’s duty to give students a comprehensive guide on what to do and where to go when severe weather strikes.