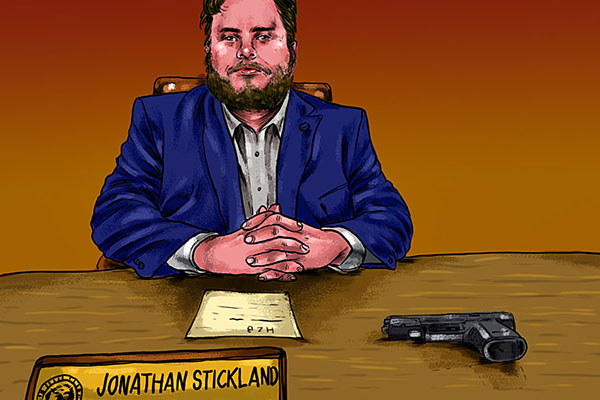 After an activist went to homes of lawmakers, state Rep. Jonathan Stickland, R-Bedford, withdrew House Bill 357 last week, which would allow Texans to openly carry a handgun without a permit.

Chris McNutt, executive director of Texas Gun Rights, posted on social media his intentions to visit lawmakers’ homes to advocate for HB 357 after the bill was left languishing in committee. He was intercepted by state troopers when he arrived at House Speaker Dennis Bonnen’s home. Stickland said one reason he withdrew the bill was because he did not want to condone this extreme form of advocacy.

“Advocating for issues and bills are not only a good thing but it is the duty of every liberty-loving Texan,” Stickland said in a Facebook video. “With that being said, there is a right way and a wrong way to influence the legislative process. It is never okay to target their homes or personal businesses.”

While many bills fail in the legislative process, this constitutional carry bill highlights the consequences when political advocacy crosses the line. Government junior James Ford said similar bills are possible in Texas if advocates show their support in better ways.

“Considering the bill was withdrawn due to external approaches, people need to go about it from another angle,” Ford said.

Stickland said he was adamant on continuing forward with bills like HB 357.

“I remain committed to the policy and protecting your second amendment rights,” Stickland said in a statement.

However, anti-gun activists are celebrating the failure of this bill as a win for stronger gun reform. Selina Eshraghi, chemical engineering and radio-television-film sophomore, said she advocated against this bill at the start of the legislative session with March For Our Lives-Austin.

“It’s concerning to us in the gun violence community that the bill was only shut down after politicians were personally threatened,” Eshraghi said. “However, having a victory under our belts keeps those of us advocating for gun violence prevention bills going.”

Eshraghi said the most important outcome of the bill’s failure is the message it sends to citizens about the power of proper advocacy.

“Part of being a good advocate is respecting the politicians you are talking to,” Eshraghi said. “I really hope this very clear breach of privacy helps shine a light on what an average constituent can do in the sense of advocating at the Capitol and calling their representatives.”