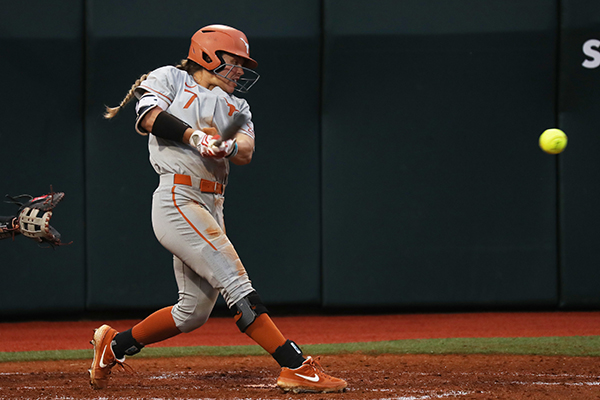 Texas has welcomed a number of talented teams to Austin this season but none quite like the No. 1 Oklahoma Sooners.

The Longhorns have lost each of the last 15 meetings with Oklahoma. Their last win against the Sooners was five years ago to the day — a 9-0 shutout on
April 18, 2014.

“There’s a lot of situations where there’s teams that have dominated other teams for however many years, and sometimes you just gotta say enough is
enough,” outfielder Reagan Hathaway said. “We’re tired of getting beaten by them. It feels like our time, and we’re just gonna go out there and play our game.”

Historically, Texas has been unsuccessful when facing top-ranked opponents, holding just a 4–15 mark against such teams all-time. To change that, Texas head coach Mike White is approaching the series one game at a time.

“It comes down to who plays best on the day,” White said. “Obviously Oklahoma is loaded with talent … They hit well, they got a great fielding percentage, they got deep pitching, but we don’t have to beat them in all three games … If we get one, then we go for two. We can’t try and win all three at one shot, so it’s one pitch, one out at a time, and that’s what we gotta do.”

Entering Thursday’s series opener, Texas is 7–3 in the Big 12 and 36–9 overall. In the past, White has credited some of these victories to his team’s capitalization on its opponents’ mistakes. But he also knows if the Longhorns aren’t careful against the country’s top team, they could easily face the same fate.

“We got to execute most of the games that we have won by big margins, and we’ve done so because the other team has made errors — either walks, errors (or) mental mistakes,” White said. “That’s how we’ve run ruled teams. Oklahoma will do the same thing to us if we do those things. … We keep those things to a minimum, then we have a chance in every game, and that’s our goal.”

The rivalry has been a highly anticipated series for many Texas players who are looking forward to redeeming themselves after years of losses to the Sooners. Their first opportunity of the weekend will begin on Thursday at Red & Charline McCombs Field.

“I’ve been looking forward to this series the whole entire season,” Hathaway said. “It’s gonna be one of the craziest series I’ve ever been apart of in my whole career here, and I’m really excited to see what we can do in that type of environment.”