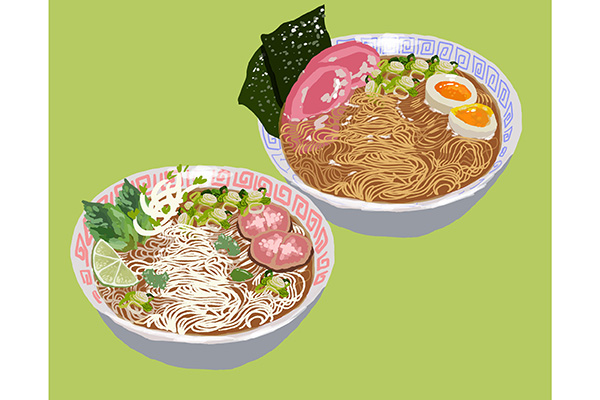 Phở and ramen have traveled the distance from their countries of origin to become standouts in the Austin food scene. Phở is a Vietnamese noodle dish traditionally made of rice noodles in a lighter beef or chicken broth made from meat and bone simmered for several hours, while the basic Japanese ramen is made with thicker wheat noodles in a heartier pork or dashi broth that can be flavored with miso.

While each dish differs in preparation and history, they converge when taken to the mainstream stage — they can create a cultural exchange.

Architectural engineering sophomore Ryan Tomita said when his grandfather and great-grandfather immigrated to America from Japan they had to limit speaking their native language. His family began integrating more toward the English language due to Japanese internment during the 1940s.

“By the time we got to my generation, we have a couple family emblems, but besides (that) there’s not whole lot of Asian traditions,” Tomita said.

Even though ramen only represents a small facet of Japanese culture, Tomita said he’s grateful there are places where someone can get the dish.

“I wouldn’t substitute a food for an entire culture,” Tomita said. “But, in a sense, it’s a step toward integrating different cultures.”

Kayo Asazu, co-owner of Daruma Ramen in Austin and two other ramen restaurants, said ramen in Japan is a quick, casual meal.

“Being Japanese, it’s not something you make at home,” Asazu said. “Ramen is something you go and eat. It’s almost like a hot dog. People don’t make their own hot dogs, but you still want to eat it.”

Asazu said in Japan ramen is eaten mostly by students and those performing physical labor. In America, these trends surrounding ramen are different. Asazu said in the United States various people eat ramen and spend more time eating it while having conversations.

“Here in Austin, it’s gotten so popular,” Asazu said. “It kind of took off. Ramen has sort of taken its own style here, and I kind of like seeing that happen.”

Chemistry junior Geneivie Nguyen said she can’t remember a time when she wasn’t eating phở. For Nguyen, one of her favorite things about phở is sharing it.

“When a friend of mine tried phở with me, it felt kind of like I opened some doors,” Nguyen said. “It was something that we could share and eat together again. It’s warm, it’s love. It’s nice showing someone a part of us (our culture).”

UT alumna Tien Do, who graduated in 2010, co-founded the restaurant Pho Please with her husband and said phở is a staple in Vietnamese homes.

“Mom would make it, grandma would make it,” Do said. “It’s clean and crisp, so we wanted to introduce that to the American culture. It’s why we called it ‘Pho Please.’ We wanted to make phở an Austin-American thing.”

She said the phở scene has evolved throughout her time in Austin from just a few shops to several.

“It’s amazing. It’s so common these days,” Do said. “Back when I was little, I only visited two or three phở shops and now there’s so many. I like it.”

UT alumna Jane Ko, who graduated in 2012 and is a blogger, influencer and creator of the food guide A Taste of Koko, said phở and ramen appeal to people because of the comfort both provide.

“What’s there not to love about a hot, steaming bowl of broth with silky noodles that you can slurp up,” Ko said. “It’s a comfort food. You get this sense of enjoyment that you don’t get from eating a burger or slice of pizza.”