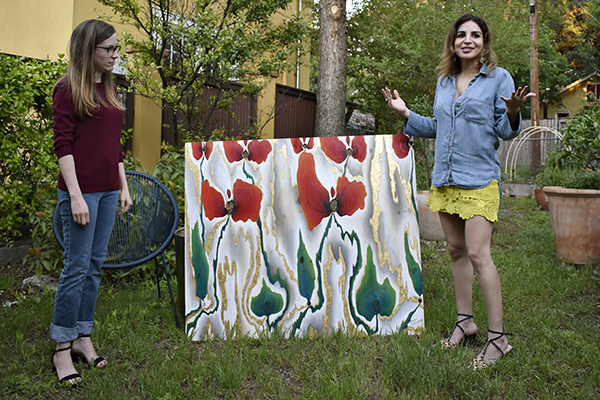 A Selena-loving DJ, an open bar and pizza do not match the archetype of a traditional art show.

All-female art pop-up Bloom, hosted by atxGALS, embraces its nontraditional format and benefits the Girls Empowerment Network, a nonprofit that hosts events to boost confidence and independence for girls in grade school. The event will take place tonight at 6 p.m. at The Refinery.

Monica Ceniceros, co-founder and CEO of atxGALS and featured artist at Bloom, said the team strives to make their events energetic and welcoming.

“(Bloom) is a great alternative for a typical night out in Austin,” Ceniceros said. “It’s diverse. Each artist brings their followers, but then we have a lot of loyal followers as well that keep coming back to events.”

The event will feature 10 local female artists from an array of styles. Ceniceros paints on wood, and atxGALS co-founder Whitney Turetzky’s mediums are mixed media and photographs.

Ceniceros said atxGALS ensures their artists have interpersonal skills to encourage interaction with attendees at their events. The DJ, Diggy Dutch, with a picture of Selena printed on his turntables, will contribute to the vibe with hip hop music, Ceniceros said.

“We just want to make sure that it’s an ambience that’s comfortable and fun for people to come in and experience really incredible art that you normally would see in a gallery setting — just more urban,” Ceniceros said.

The event will feature an open bar, Dutch and small bites from pizza restaurant Via 313. For the $35 early bird ticket, attendees will receive a swag bag with gifts such as free yoga classes.

Turetzky said featuring only women is important because they deserve equality in creative fields. Before meeting Ceniceros at a pop-up, Turetzky said she worked as a grade school teacher. Ceniceros works full-time as a marketing consultant.

“What Monica and I can sell a painting for, a male artist can double it in pay,” Turetzky said. “There wasn’t a seat at the table for us, so we built our seat and pulled it up.”

A raffle will be held at the event with all the proceeds benefiting GEN, Ceniceros said. Prizes will range from Kendra Scott jewelry to a hostel stay and a hydro facials. atxGALS has previously partnered with the SAFE Alliance, an abuse shelter, Turetzky said, and they chose to benefit GEN because of the work they do to help young girls.

“(GEN) says they ignite the fire that already exists in young girls,” Turetzky said. “From the beginning it’s almost been like a no-brainer.”

Biology junior Rebecca Torres said she saw the event on Facebook and as an artist herself, was interested in attending.

“It’s really fun to talk to other people about the process they go through doing art, so (I) learn from them and take it home and try it on my own,” Torres said.

Ceniceros said she was pleasantly surprised by the positive feedback atxGALS has already received.

“We have some young artists that come in and they’re like, ‘I went home and painted because I was so inspired after leaving the show,’” Ceniceros said. “I want to make sure that we’re inspiring people for positive change, whether that’s personal or giving back to community.”