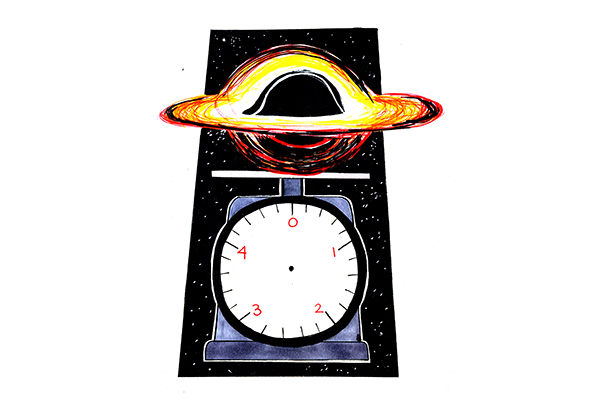 The first-ever pictures of a black hole, released April 10, are helping UT researchers gauge the accuracy of their own studies.

Astronomy professor Karl Gebhardt, who studies masses of black holes, said the images of the Messier 87 black hole, taken by the Event Horizon Telescope team, helped researchers confirm their predictions about black holes. Black holes are a collection of matter that have a gravitational force so strong, nothing can escape it, Gebhardt said.

“Objects would have to move faster than the speed of light to escape a black hole, which is impossible,” Gebhardt said.

Scientists use different techniques to study black holes, but the common way to measure their mass is to observe the stars in motion around the black hole, Gebhardt said.

“You measure how fast the stars are going around the black hole,” Gebhardt said. “From there, you can infer the mass.”

Gebhardt said he used this technique, as well as computer modeling, to predict the mass of Messier 87 in 2009.

“When the (Event Horizon) team came out with the image, they also measured the mass,” Gebhardt said. “I was amazed to see that their measurement was exactly the same as the one I had.”

Gebhardt said he is currently working with the Event Horizon team to improve the accuracy of his mass predictions. Event Horizon will continue taking pictures of Messier 87 to get a higher quality image, Gebhardt said.

“If (Event Horizon) had better mass estimates, then they could make better predictions of what the image would look like,” Gebhardt said. “I want to remeasure the mass of (Messier 87) to provide them with more accurate estimates.”

Another way the Event Horizon images could help black hole research at UT is by combining image observations with data from the
Laser Interferometer Gravitational-Wave Observatory, or Project LIGO, a large collaboration UT is a part of. Project LIGO is an experiment that detects gravitational waves, which are formed when two black holes orbit and collide into each other, said physics professor Aaron Zimmerman, who is involved with the project.

“By studying gravitational waves, we can learn about the sizes of black holes,” Zimmerman said. “We can see how far away they are in the universe and have a way of mapping out the universe.”

“The findings from (Messier 87) are based on light, but we can’t look at gravitational waves from it,” Bustamante said. “In that sense, the two studies complement each other.”

These studies on black holes are important because they can help scientists understand how gravity works, Gebhardt said.

“One way to understand it is by studying black holes, where gravity is at its strongest effect,” Gebhardt said. “We can test our models of gravity against observations from black hole studies. If the models still hold, it means we are closer to understanding how gravity works.”