For Texas’ top prospects, four years comes down to this weekend 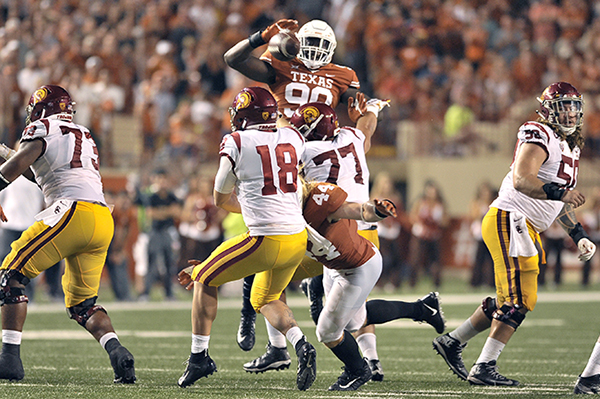 For defensive end Charles Omenihu, the journey to this week started over a year ago. Coming off a productive junior season in which he played in all 13 games and recorded 28 total tackles, the NFL seemed like the next logical step for Omenihu. However, there was only one thing that factored into his decision to stay for his senior season.

“If you’re not for sure a first round pick, come back,” Omenihu said at Texas’ Pro Day. “Best decision of my life, obviously, and it helped me tremendously.”

After tallying a career-high 45 tackles and doubling his 2017 sack total last season, it’s safe to say that decision paid off. A senior Bowl appearance, meetings with all 32 NFL Teams and a strong Pro Day have Omenihu projected to be as high as a second-round pick at the NFL Draft this week in Nashville.

Omenihu also made official visits to four NFL team facilities, showcasing his length — a seven-foot wingspan — and his ability to create separation. But regardless of what he can show, it’s up to NFL teams to decide the position he plays on the field.

“Not a lot of people have my length,” Omenihu said. “If you can’t touch me, you can’t block me. I have no ceiling on what I can play.”

Not everyone seems to agree with Omenihu’s advice, though. That’s the case for wide receiver Lil’Jordan Humphrey, who opted to forego his senior season at Texas.

Humphrey, who’s coming off a 1,176-yard, nine-touchdown junior season, had several questions to answer regarding his speed and position. And after a disappointing showing at the NFL Combine, it was clear he had to advertise himself to teams in a different manner.

“I just felt like it was my time,” Humphrey said. “They’ve (NFL Teams) been the ones telling me ‘Don’t worry about speed … football is football.’”

Humphrey also had to make the tough choice to sit out of receiver drills at Texas’ Pro Day, as he chose to let his game film do the talking rather than an in-person showing that had higher potential of hurting his draft stock.

Even top prospects like Oklahoma quarterback Kyler Murray made a decision similar to Humphrey’s, forcing teams to take a chance on them at the minimum. It’s decisions like these that make this time of year even more unpredictable for both NFL teams and prospects.

“I’m open to anything, but I want to play receiver,” Humphrey said. “You never see me get caught, so that’s all I have to say.”

But regardless of those decisions, not many players from Texas are afforded the spotlight Murray, Humphrey and Omenihu have.

For linebacker Gary Johnson, these past couple of months were more about proving he belongs at the next level rather than polishing skills as a surefire draft pick. Johnson, who’s projected at best as a late-round pick, understands that.

“A lot of people didn’t know who I was,” Johnson said. “Once I got to the Combine, I opened a few people’s eyes that I’m as good as anyone else out there.”

Everyone gets to draft week on different paths, but it’s all powered by the dream of making an NFL roster. And that dream doesn’t have to end if Johnson’s — or any player’s — name goes uncalled this weekend.

“It’s a bigger stage,” Johnson said. “Every kid dream is of one day to get here and be in my shoes right now … it’s awesome.”