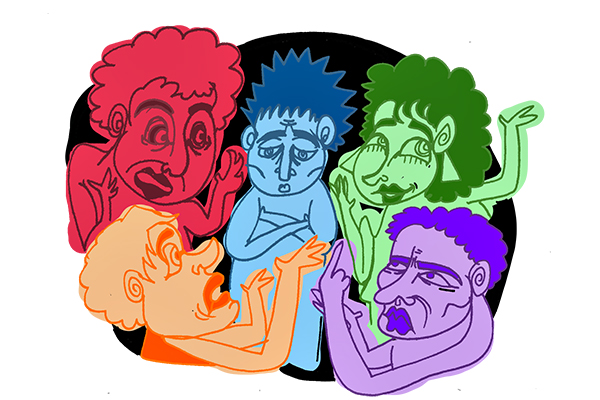 When professors propose group projects, they are often met with complaints from students.

Group projects are a common aspect of many students’ coursework. Students may report struggles with group work due to a lack of involvement and commitment from group members. Professors continue to assign them, however, to expose students to real-world experiences of collaboration.

Dan Pryor, a business communication lecturer in McCombs, stands by his decision to assign group projects in his class. He said he is aware many students dislike group projects but that these assignments prepare them for the workforce’s growing inclination towards collaborative efforts. As industries continue to shift in this direction, educators emphasize the importance of working effectively with others.

“Part of that is because no longer do you have a supervisor that supervises eight people,” Pryor said. “He or she may have a group of 30 or 35 people that he or she can’t supervise directly, so there’s more responsibility within a group of people.”

He said UT students often feel like they are better off completing the assignment by themselves. They may have had initial success, but Pryor said the ability to work with others is a vital skill for the workforce.

Advertising sophomore Juliana Vorhoff has had negative experiences with group projects and said she prefers to work alone.

“When I work in a group, I end up having to do a lot of the work because I get really worried about it turning out,” Vorhoff said. “If I had just been able to do it all by myself, it would have been faster and more efficient.”

While she understands why professors assign group projects, Vorhoff said she doesn’t find them to be beneficial to her learning.

“I know I’m going to have to work with people when I get older, so it’s better to get used to it now, but I don’t think it’s helped my learning process,” Vorhoff said.

Finance sophomore Sameer Ajani said he’s had both positive and negative experiences with group projects. He said group projects require collaboration and the ability to approach certain situations differently but that it can be difficult to coordinate everyone’s schedules.

“It’s really hard to coordinate when we can meet and for how long because everyone has so many commitments,” Ajani said.

Recently, Vorhoff said, she and one other group member were forced to complete the majority of a group project right before the deadline because other group members failed to contribute. She finished the assignment because she was afraid her grade would suffer for her group’s shortcomings.

Pryor said groups that work best together keep their commitment with each other. He said he teaches a concept called “hundred percent commitment.”

“Only make agreements you intend to keep,” Pryor said. “As work is distributed, the expectation is that people will do the work (and) people will show up to the meetings that they’ve agreed to.”