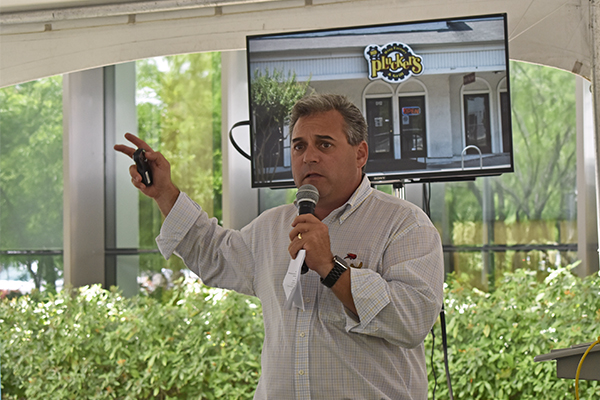 Advertising alumnus Daniel Goetz began his popsicle business, GoodPop, in 2009 when he was a senior at UT. Returning to the University on Monday, he said an important factor in running a business is hiring the right people.

“I’ve only hired people who are passionate, who reached out to (GoodPop) and said, ‘Hey, I love your product,’” Goetz said. “Work with passionate people who care about what you’re doing, and build a team.”

Goetz was one of several food entrepreneurs who attended Moody College’s first food and beverage festival, Fiscally Delicious, on April 29 to speak about their experiences starting businesses and give advice to students interested in entrepreneurship. The entrepreneurs, who were all Moody graduates, started businesses such as GoodPop, Pupsicool and Antonelli’s Cheese Shop.

The event was put on by Imagine Moody, an organization within Moody College that encourages media innovation and entrepreneurship. The student volunteers involved in Imagine Moody were dubbed “imagineers.”

Imagineer Jacob O’Shea said while Moody is a communications school, it still is connected to the world of entrepreneurship.

“We really think communication is integral to entrepreneurship,” said O’Shea, a government and corporate communications senior. “How are you going to reach consumers, reach investors if you don’t know how to communicate?”

Kendall Antonelli, co-owner of Antonelli’s Cheese Shop, said an important part of growing a business is having the confidence to promote one’s business. She said people, especially women, are not conditioned to advocate for themselves, which presents a challenge when running a business.

“You’ve got to get out there and relationship-build,” Antonelli said. “You need to advocate for yourself and reach out to (the media) and be the first and proactive one to do it.”

Goetz said he dealt with failure at the start of his business endeavor when he tried to sell popsicles at Austin City Limits Music Festival in 2009. It rained during the festival, and Goetz said he was only able to sell four popsicles.

“I lost my life savings, all the assets were frozen and I had to figure out what to do,” Goetz said.

He said when one’s business is their passion, failure can feel personal, but it’s important to separate business from emotion.

“Whatever you’re doing in life, it’s always going to be your baby,” Goetz said. “But as you go on in entrepreneurship or life, trying to separate out the emotion is how you come to solve problems that come up every day.”