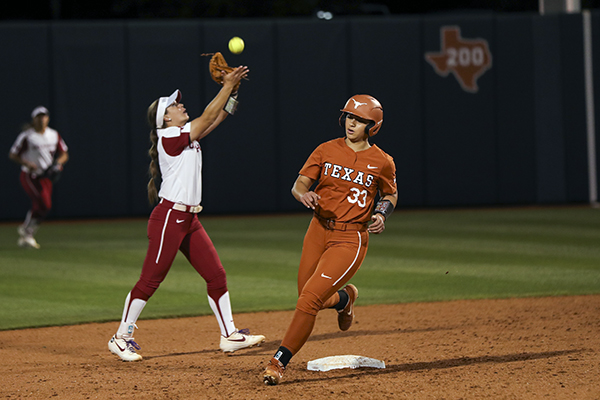 The Longhorns have one final midweek game before their last regular season series.

Texas, which is currently 10–6 in the Big 12, will see Incarnate Word at home on Wednesday night before playing two games against Baylor over the weekend.

The Longhorns are coming off a series sweep against Kansas over the weekend, and while this proved to be a better outcome than the Oklahoma series, they still ran into some improvements that need to be made.

“We didn’t really capitalize and put them away at the end there,” Texas head coach Mike White said after the Longhorns surrendered two late runs to the Jayhawks on Sunday. “(Pitcher) Miranda (Elish) pitched well but they came back on us and gave us a
good fight.”

As Texas comes closer and closer to the end of its season, the competition is only going to increase. Finding a way to stay consistent in their play, especially with a lead early in the game, will be imperative for the Longhorns’ postseason success.

For Texas, the season began with a few new faces, but the players have chosen to make team chemistry a priority among the group.

Whether it be interviewing each other with pickles on the bus to the hotel at an away game, as seen on
Texas Softball’s Instagram, or challenging other schools to dance challenges during games, the closeness of the team is evident.

“I think we can go pretty far,” catcher Mary Iakopo said before the Oklahoma series. “Just getting to know the girls and knowing how hard they work has been such a great journey so I’m ready to go all the way with them.”

Iakopo has been a force both defensively and offensively for the Longhorns. White praised her last weekend saying that she’s been the most consistent player for Texas as of late.

“Mary’s the one that’s consistent right now and we just can’t seem to help her out a little bit, but hopefully we can put it together and get some of these guys hot,” White said.

The sophomore transfer has recorded nine home runs and many defensive saves, along with 34 RBIs so far this season.

“Just keeping a lookout for where my fielders are, looking for where (second baseman) Janae (Jefferson) is, where (outfielder) Shannon (Rhodes) is, and I kinda just have this telepathy with them too, really just to help out the pitchers and get them out of big situations,” Iakopo said of her performance against UT-Arlington, once again emphasizing the benefit of strong team chemistry.

Texas will hope to utilize that chemistry to its advantage when Incarnate Word visits Wednesday at 6 p.m.