‘Overworked and underpaid!’: Graduate Students rally at the tower 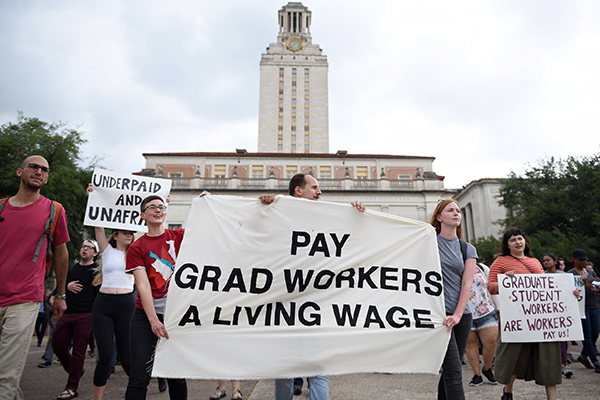 Hundreds of students rallied in front of the UT Tower on Wednesday in support of better graduate student funding, chanting, “Overworked and underpaid. We demand a living wage!”

Zoya Brumberg, a member of Underpaid at UT and American studies graduate student, said she hopes the rally brings attention to pervasive financial struggles amongst UT graduate students. Brumberg said in an email that even with loans and a second job, she has barely enough savings to cover a medical emergency.

“There was a lot of vigor and anger that felt truly palpable today,” Brumberg said. “I have a lot of hope for where this movement could go.”

Underpaid at UT emerged from the Graduate Student Labor Committee, which was formed in 2018 to study graduate student labor conditions, Brumberg said.

That committee found UT pays graduate students less than many peer institutions, and no UT college pays their average graduate student enough to meet the cost of living in Austin, which is an estimated $25,000 annually, committee chair Cassie Donnelly said.

“Having those facts, analyzing them and putting something together was a huge game changer,” classics graduate student Donnelly said. “It made the University have to engage with us.”

“If we want our graduate school programs to be internationally competitive, then we have to put our money where our mouth is,” Hedrick said.