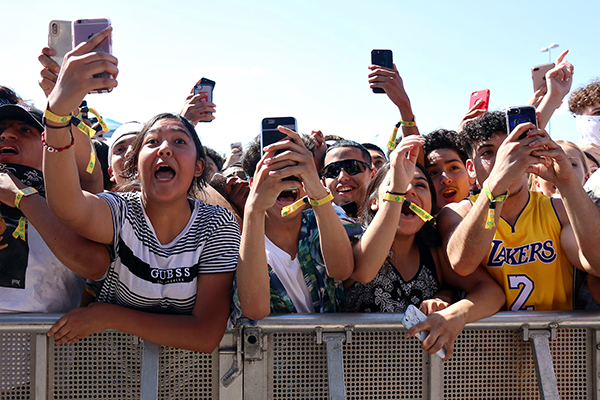 Hip-hop’s most relevant and popular artists will be split between the Wolf and the Shrimp stages this Saturday at JMBLYA. With 15 artists slated to perform from 1 p.m. to 10:15 p.m., hip-hop lovers might have a tough time deciding who to see and which stage to spend their time at. Here are the seven of the top performers who will be there, along with their stage and set time.

Charlotte-raised DaBaby blew up with his debut album Baby on Baby which was released March 1. The album features Offset and Rich the Kid, and its hits such as “Suge,” along with “Gorilla Glue” off his Back On My Baby Jesus Sh!t mixtape should be able to get the crowd excited in anticipation for the larger acts.

Travis Scott’s protégé, who created the 2018 smash-hit “Mo Bamba,” brings an eerie, but off-the-rails vibe to the mic. He was an opener for Scott on his Astroworld — Wish You Were Here Tour, and performances of his hit “Mo Bamba,” along with “Live Sheck Wes” and “Chippi Chippi” off his 2018 Mudboy album are sure to start intense moshes.

On March 22, JMBLYA announced the addition of DaBaby, JPEGMAFIA and Lil Nas X to the lineup. With a 10-minute set, Lil Nas X will probably only play his iconic country/rap smash hit “Old Town Road,” and possibly the Billy Ray Cyrus remix, which is sure to make every fan in attendance lose their mind.

The 2018 ACL Sunday headliner is back again with the continuation of his post-Astroworld shows. Prepare to mosha lot, and be lured into a psychedelic-rap roller coaster of adrenaline. His ACL show in October 2018 included literal fireworks and everyone in the crowd knew the lyrics to every song.

The elegant Atlanta rapper will not be as energetic a performance as many of the other artists. But Gunna’s groovy and melodic flow will have attendees bobbing their heads to his hits such as “Drip Too Hard” and “Sold Out Dates.”

JPEGMAFIA, or as he likes to call himself, Peggy, does not fit the traditional rap mold that JMBLYA usually presents. But he still delivers passionate, heavily produced, techno bangers that will both confuse and excite the crowd. His talent will shine through mostly on tracks like “Baby I’m Bleeding” and “Thug Tears” off his 2018 album Veteran.

Lil Wayne is back in Austin after his Weekend Two performance at ACL in October 2018. His set included many of the catchy pop-rap tunes students remember falling in love with over the course of his career. Expect to hear many of his radio hits such as “Love Me” and “Go DJ,” along with songs from his 2018 album Tha Carter V.

Tickets are still on sale on the JMBLYA website, and general admission and VIP are both offered.