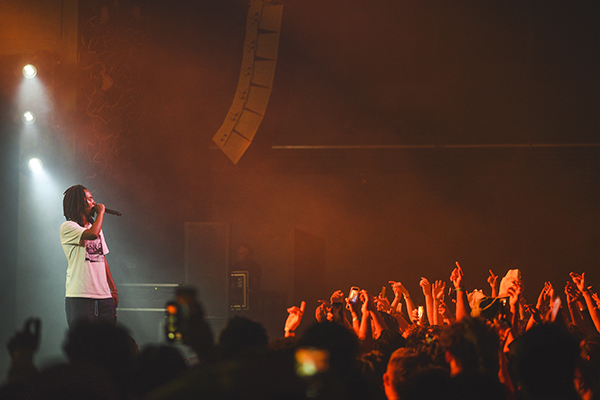 With the mellow, alternative hip-hop sounds of Earl Sweatshirt’s studio records, most concertgoers expect to be part of a contemplative, head-bobbing live show. However, on Wednesday, May 1 at Emo’s, Earl performed to a high-energy crowd while on a nationwide tour following the release of his 2018 album Some Rap Songs.

The openers of the “Fire it Up!” tour set a laid-back performing tone for the night. Rapper MIKE, who influenced the new musical direction of Earl’s latest album, came out with an honest admittance of fatigue and lack of sleep. Despite this, his energy levels dialed up to powerfully sit on each syllable accompanying the throbbing beats of songs like “Grabba.”

Following MIKE, Dallas R&B singer Liv.E put together a lovely alliance of groovy melodies, stimulating visuals and a glowing personality capped with a Texas-sized cowboy hat. Unfortunately, during these acts, there were problems with the sound system ranging from audio feedback issues to the accompaniment overpowering the singer’s vocals.

The crowd was laid back through the performances of these two openers, demonstrating approval by means of quiet nodding and the occasional shoutout, cheering loudly only when the performer prompted them to. However, when Earl quietly drifted onto the stage with his opening track “Molasses,” all notions of personal space went out the window as the feverish audience packed in tight to get closer to the artist.

There was an unexpectedly fun dynamic created by the juxtaposition of the audience’s rabid motion and Earl’s lumbering energy. The track “Off Top” prompted an industrious mosh pit in front of the stage, one that expanded and contracted for the remainder of the show. Earl seemed to go into another mental space when performing, often facing the side stage area for entire stanzas.

The only thing needed to get through to the fans was the music, the only thing they seemed to care about. The pace of the production and the background visuals created a trance-like aura, matched by Earl’s slow and deliberate movement. He hunched forward and clutched the microphone to deliver a potent and calculated flow of lyrics.

Earl composed a setlist that spanned his entire discography, dipping into old favorites like “Huey” and “20 Wave Caps,” as well as material from his latest album. Supporters knew every word, screaming in unison as if to prove to Earl their unshakable passion for his music. Fans even rapped along to unreleased songs like “No Funny Sh*t,” presumably because they scoured SoundCloud and YouTube for leaked material.

The introspection into his mental state prevalent throughout Earl’s career created a fan base present at Emo’s that could relate deeply to his message. Earl discussed his familial relationships on his latest album following the death of his father in early 2018. He explored themes of monotony, loneliness and depression on his earlier records.

Instrumental “Riot!” played as Earl signed off the stage, thanking everybody in the building from the sound engineers to the fans walking out with visible wonderment still strapped to their faces. Earl Sweatshirt & Friends brought a union of the expected and unexpected, manufacturing a live experience just as captivating as Earl’s studio albums.