No. 2 Texas handles business at home, advances to sixth-straight Round of 16 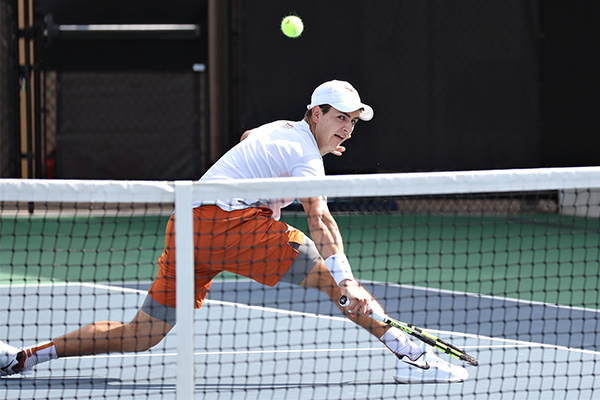 The No. 2 overall seed got to reap its rewards this weekend with two home matches, turning them into two home victories. Texas secured its sixth straight round of 16 appearance in the NCAA Championships after taking care of Tennessee Tech and South Florida on Friday and Saturday.

The Longhorns got an earlier start than expected as the first round match against Tennessee Tech was moved up an hour to try to get ahead of inclement weather. Texas moved quickly as senior Johnny Goodwin moved into the doubles lineup and clinched the point alongside junior Yuya Ito, who would go on to clinch the match 4-0.

It was impeccable timing from Ito as rain began to fall soon after that would delay the simultaneous South Florida-Alabama match from ending until around 9 p.m.

“I was pleased with how our guys performed with the change in the schedule,” interim head coach Bruce Berque said. “In singles, all the guys really stepped up and played well, and any one of them could have clinched the match for us.”

By first serve the next morning, there was hardly a breeze or a cloud in the sky as Texas faced South Florida.

The Bulls jumped out early and grabbed the doubles point, with the Longhorns dropping their seventh doubles point all year.

“(South Florida) played great in doubles, they started well with great energy,” Ito said. “In the locker room, we talked about just bouncing back, we’ve been in this situation … I think we did a great job at bouncing back and giving all our energy out there.”

Texas would indeed bounce back quickly as senior Colin Markes clinched the first singles match for the second day in a row with an efficient 6-2, 6-3 defeat of Sergio Gomez-Montesa. Markes moved his dual match singles record to 18–3, leading Berque to call him “arguably the best number five (singles) in the country.”

Though the Longhorns would end up winning every finished set in singles play, each game was hard-earned, a thought that was clearly on Berque’s mind after the match.

“It’s good (facing adversity), it creates a little bit of an edge through most of the match,” Berque said. “That thought did cross my mind, this might be good for (the team). They had to come out, they knew they all had to play hard. We could have no soft spots on the court and we didn’t. I think it was a positive now that we won.”

And it was the senior, Rodrigo Banzer, closing out the match with a 7-4 tiebreak win in the second set to move the Longhorns into the Round of 16. Banzer, who didn’t play on Friday in the first round, added another clincher to a career chock-full of them.

The perks of being the No. 2 overall seed will continue, as Texas welcomes No. 24 California next weekend as the Golden Bears come off an upset of No. 15 Illinois. The two teams met last year in the second round, ending in a 4-0 sweep for Texas.