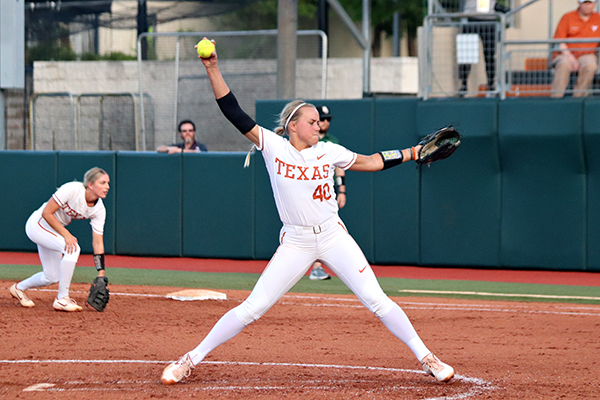 It’s been 14 years since Texas Softball claimed a Big 12 Tournament championship. And for the first time in years, the Longhorns will head into the postseason as true contenders for the conference title.

Two weekends ago, Texas fell in a three-game sweep at the hands of Oklahoma. After the Sooners finished the regular season undefeated in conference play, the Longhorns ended up in third place at 12–6 in Big 12 play.

Despite a decline in hitting over the last several weeks of the season, the Longhorns are optimistic they can take advantage of their chance to contend for a conference championship this weekend.

“We’re all excited,” first baseman Lauren Burke said after the win over Baylor on Sunday. “Everything’s starting to come together really well for us. (The sweep of Baylor) was a great way to end conference.”

The Longhorns know what their identity is. The backbone of this team has never been its ability to hit the ball out of the park. It’s been relying on their three stellar starting pitchers, each with ERAs below 2.50, while doing enough offensively to get the job done. Over the second half of the season, Texas has done just that.

“We’re one of those teams. I think we’ve been winning, but we haven’t been clicking on all cylinders,” Texas head coach Mike White said. “I know we can play better than what we’re doing. At times, we play great defense. (Last) weekend, we played very good defense. No errors in two games. We pitched very well — we have the staff to do that.”

That’s what White has brought to the table this season: a superb knowledge of pitching. Starting pitchers Miranda Elish, Shea O’Leary and Brooke Bolinger have been as good as any rotation in the conference this season, in large part due to White’s expertise.

Offensively, however, Texas has stuck with the old adage of “quality over quantity.” The Longhorns have struggled at times to put together big innings but have been able to come through with some hits in big spots.

This was on full display in the regular season finale, as Burke and outfielder Kaitlyn Washington came through with big hits to push the Longhorns past Baylor (18–31) with a three-run rally in the fifth inning. However, White knows as the competition gets stiffer, Texas’ previous best will not be enough.

“We’ve got to hit under pressure,” White said. “We’ve got to have that from the start, not wait until the fourth or fifth (inning). We’ve just got to string hits together.”

Its ability to hit in key spots has been the life and death of Texas this season. In an early season series with Oklahoma State, the Longhorns’ first opponent this weekend, Texas dropped the first two games and lost in shutout fashion both times.

With a must-win matchup against the Cowgirls looming Friday in Oklahoma City, it’s time for the Longhorns to rely on what they do best: let Miranda Elish get her job done in the circle, and manufacture enough runs to send themselves through to the conference championship game.