The Daily Texan • May 9, 2019 • https://thedailytexan.com/2019/05/09/process-to-internally-transfer-can-be-an-uphill-battle-for-undeclared-students/ 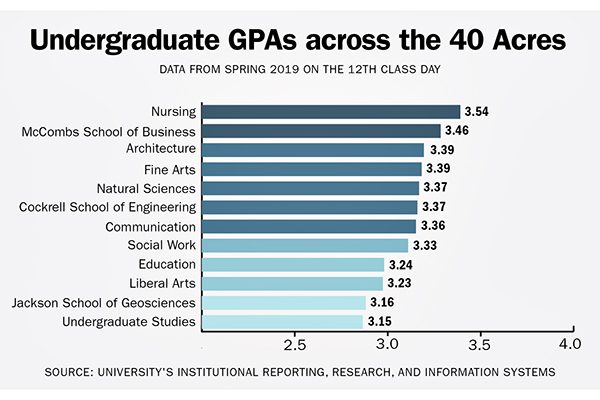 Grade point average requirements for internal transfer admissions can pose a challenge to students such as those enrolled in the School of Undergraduate Studies, which had the lowest average GPA of all the colleges at UT during the 2018-2019 school year.

Students enrolled in UGS enter UT as undeclared students, and they need to choose a major and transfer into another college by the end of their second year.

UGS academic adviser Michele Crandell said one reason why UGS might have a lower average GPA is because the school does not have additional academic probation rules.

“Some of the more competitive departments have their own probation standards outside of the scholastic probation,” Crandell said. “At UGS, we just get all students.”

Maryam Blooki, an economics and human dimensions of organizations senior, said going through the internal transfer process her freshman year was an uphill battle. The average GPA of admitted internal transfer students for the McCombs School of Business was a 3.9 for the fall of 2017. Blooki wanted to transfer into McCombs, but her first semester she made two As and two C pluses. Her GPA discouraged her from applying to transfer into McCombs.

“It was really hard for me because education is so important to me, and I worked so hard to be such a good student that I felt like I was disappointing my parents the whole time,” Blooki said.

Blooki said she couldn’t keep her GPA up because she was adjusting to many changes during her freshman year.

“I just felt like it was impossible for me to do that within my first year of college especially since I’m adjusting to school,” Blooki said. “I’m in a new city that I’ve never been to, and I’m trying to figure out who my friends are (and) what I’m interested in.”

Blooki said she thinks McCombs should change their internal transfer GPA requirement, which is currently a minimum of 3.25, and take factors other than GPA into consideration.

“When you only put a GPA cap on who you admit into your school that is not including a lot of great talent,” Blooki said. “There needs to be room for you to make mistakes your first semester of college and then still be able to have the same opportunities.”

Accounting junior Ulissa Calix transferred into McCombs from UGS but said she acknowledges it can be difficult for students to adapt to college.

“That’s the thing about your freshman year that you’re also learning how to study for exams, like how to prepare for things,” Calix said.

Calix said the GPA requirement should stay the same because it forces students to do well during their first year.

“(The GPA requirement) also helps you understand the level of intensity of (the) classes McCombs offers,” Calix said.

Blooki said it took her some time to appreciate her liberal arts degree, but things worked out for her because she was able to get an internship at the firm she wanted.

“Now that I’m about to graduate I feel like things turned out well,” Blooki said.