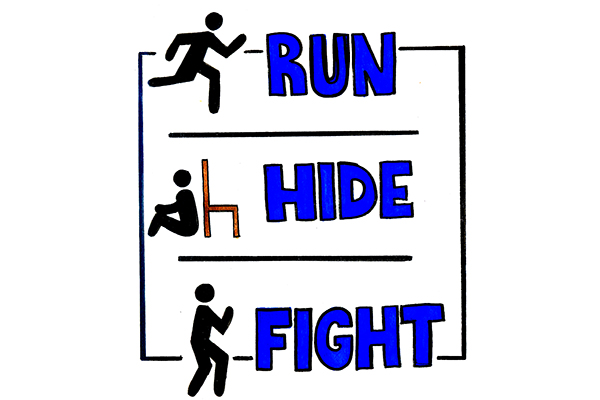 School shootings have dominated the headlines, with two in the United States since April 30. The UT Police Department announced in early April they will host two information sessions in the fall to train students and staff on how to respond to an active shooter on campus.

Bonnet said UTPD teaches the “run, hide, fight” model, which can be seen on graphics posted around campus and online.

“If you can get away safely and get to a safe location, then that is the best solution,” Bonnet said. “If (not), then you need to hide, so lock doors, turn off lights — whatever you can do to make sure you’re not a target for whoever the shooter or shooters are.”

Bonnet said the last resort, to fight, is a very personal decision and depends heavily on the circumstances.

UTPD has previously offered training upon request, but this fall will be the first time the department hosts a large session at the station open to any UT affiliates who may not be in a group that
requests a training.

“There’s far too many mass shootings everywhere,” Johnson said. “The ones that hit most directly at home are the university ones. Two years ago, right before finals … there was a stabbing on campus that killed a student, and I thought, ‘It’s the end of the semester, let’s remind people it’s a stressful time for everybody,’ and that’s what I did.”

Government junior Conner Vanden Hoek said he thinks formal training from UTPD for these situations would be beneficial, and he would want to learn more about what to do in a common space, rather than a classroom.

“If you’re in the bathroom or the Union or the (Student Activity Center) — that’s a little bit more confusing,” Vanden Hoek said. “This is something every student has thought about, at least once or twice. It’s unfortunate we’ve been raised in such a culture (where) thoughts going into your first day (of school) are like, ‘Where’s the exits?’”

Selina Eshraghi, director for Austin March for our Lives, said as a gun violence prevention activist, she has thought every day about what she would do in an active shooter situation and what more she could do to prevent them.

“Every time another shooting happens, you think, ‘What could I have done? If I had fought harder for xyz legislation, would I have been able to prevent this?’” said Eshraghi, a chemical engineering and radio-television-film sophomore. “Even though logically none of these lives … were lives that you were responsible for, and the actions of the shooter are definitely not something that you’re responsible for, you start to feel a sense of responsibility because you do involve yourself with this issue every day.”