How to celebrate Pride month in Austin for free 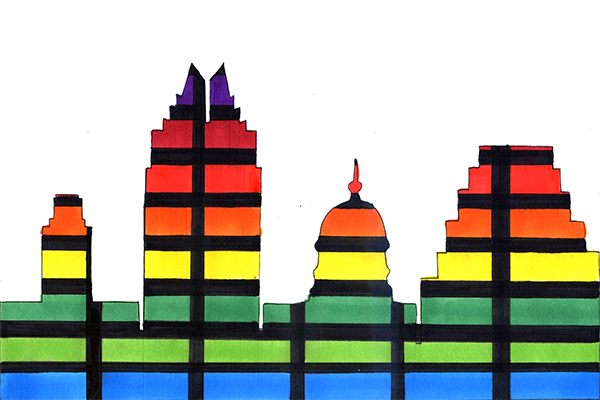 Glitter, drag and dancing will rain over Austin for the next month. Pride celebrations kicked off with events in early June, but there are still new opportunities to celebrate before the official parade and festival this year.

Gays on the Green

The AIDS Services of Austin’s outreach program, The Q, will be hosting an LGBTQ meetup at Zilker Metropolitan Park during Blues on the Green by Austin City Limits Radio. The Q will provide snacks and drinks to anyone who comes to congregate at the pride flag erected by the event organizers.

The Q event specialist Juan Benitez said the organization has informally hosted the meetup for the past three years but decided to publicize it as an official event this year.

“By putting (out) our pride flag, we find that other people see the flag and ask if they can sit with us,” Benitez said. “Anyone’s welcome to come. It’s basically creating a queer space for Blues on the Green.”

Rainbow on the Creek

The Waller Creek Conservancy is hosting Rainbow on the Creek. The event celebrates Pride Month through educational resources, activities, local vendors and performances headlined by RuPaul’s Drag Race’s Coco Montrese. The event also features a Stonewall riots history exhibit and a panel of local LGBTQ advocates. There will be a set of children’s activities dubbed “Pride is for Families,” including a drag queen storytime.

Donald Miller, programming and events manager for the Waller Creek Conservancy, said the conservancy hopes to promote the new Waterloo Neighborhood Park for the event to be held annually.

“We wanted to have meaningful program,” Miller said. “So we identified a need to have a free, public LGBT event.”

Rainbow on the Creek will be held at Symphony Square from 2 to 9 p.m. on June 15.

The Austin Public Library will host its second Pride Prom this year featuring DJ Girlfriend and local LGBTQ organizations. Attendees can glam up at a drag makeup station and capture their look in a photo booth before joining the dance and drag show. Customizable pronoun buttons will also be provided.

Lindsay Pease, the library’s public information specialist, said although all library branches support LGBTQ pride through their own initiatives, events like Pride Prom have been made possible by the opening of the new central branch that holds a larger event center. The central branch is also hosting an art exhibition featuring queer people of color this month titled “All Shades Considered.”

“(Pride Prom is) free and open to the public, and it’s very important that that automatically makes it very inclusive,” Pease said. ”We have celebrated the community, but as it grows, we’re recognizing the needs of the community and having events to support that.”

The Austin PRIDE Festival and Parade is not scheduled during June, and instead falls on August 10 from 11 a.m. to 7 p.m. The Boogie Wonderland-themed parade is free to attend and festival tickets start at $17. The festival will feature performances, carnival games and rides and over 100 vendors.