Students use summer classes to get ahead, graduate on time 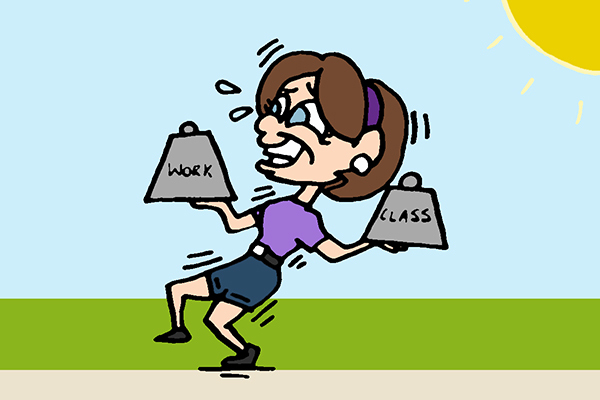 There are about three weeks between spring semester finals and the first summer session, leaving students little time to visit their families.

“It’s inevitable that I had to take something during the summer,” Escamilla said. “For some students, you just can’t avoid it.”

Escamilla, a first-generation student, said she had to explain her situation to her parents to help them understand why she needed to stay at UT for the summer. Since education is a priority in her family, Escamilla said they support the measures she takes to earn a degree.

“It was sad to hear (my mom) say, ‘If you’re taking summer classes that means you graduate earlier, right?’” Escamilla said. “I was like, ‘No, it just means I can graduate on time.’”

Taking summer classes is not cost-effective, since tuition rates decrease as hours taken rises and state aid is not given in the summer.

Escamilla said splitting rent with her boyfriend helps her financially and gives her a companion while her friends are gone for the summer.

“Summer’s really fast paced,” Escamilla said. “If you don’t have a support group, it’s going to take a toll on your mental health.”

Despite the daily quizzes in her Mandarin Chinese course, Escamilla said having only five people in the class allows for more one-on-one time with her professor and gives her confidence to interact in class.

Some students take summer courses because they are less competitive to get into compared to the fall and spring semesters.

Anthropology and linguistics junior Emily Prewitt is taking an American Sign Language introductory course over the summer. Since it’s typically difficult to get into the class during the fall, Prewitt said her family pushed her to enroll in the summer.

“(My mom) wants me to graduate early so badly,” Prewitt said. “(She) was like, ‘If you don’t take a summer class, I’m going to be disappointed in you. You might as well do something productive.’”

Prewitt hopes to graduate early and receive a tuition rebate.

Prewitt works over 30 hours per week and visits her family about once a month, but she said she’d like to see her best friend and boyfriend in Denton, Texas, more often.

“I wish I could have more plans, but since I’m working that already stifles what I would want to (do),” Prewitt said. “I’m jealous of people who don’t have jobs and don’t have to take summer classes.”

“My advertising research course is really intense,” Camp said. “We have a test (the second) week already. If I’m not giving you a tour of the dorm or answering the phone, I can work on my schoolwork.”

“(Summer courses are) one of the sacrifices that comes with pursuing higher education,” Escamilla said. “I feel like UT pressures us to graduate on time.”