UT course schedules need to be released during spring break 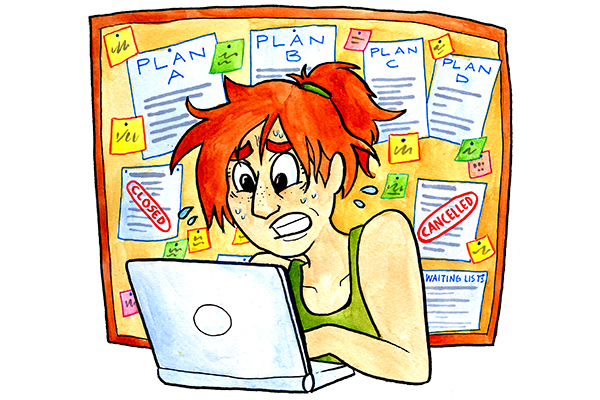 Midterms, finals, internships, summer traveling …  and what do you know, the course schedule for next semester just dropped.

UT course schedules for the fall and summer semesters are generally released during the beginning of April each year. UT has the ability to release these course schedules over spring break, which is typically in mid-to-late March, as opposed to dropping them in the midst of the looming, dreaded finals season — the question is, why aren’t they?

At this time of the semester, students are hard-pressed with end of the year projects and exams, but also find themselves having to worry about course schedules and class registration for the subsequent fall semester. Students should have the opportunity to allocate a precise energy and effort into deciding their future courses without dealing with the pressures associated with the courses they’re already enrolled in. Spring break presents this opportunity. Thus, UT should release course schedules during spring break, allowing students more time to pick out future courses without being burdened by external academic and societal pressures.

“I would’ve personally liked to have course schedules released (during spring break) … because you have the time and the (mental) capacity to really focus on it and pay attention to it,” social work junior Samantha Drogosch said. “Whenever the course schedule comes out, I don’t even look at it until the day of my registration sometimes.”

This is the standard for a handful of students as class registration and picking out courses for upcoming semesters can be both demanding and stressful.

“If this university wants to promote ‘What starts here changes the world’… then I think it needs to do everything it can to reduce stress loads on its students,” Drogosch said.

UT underestimates the mental fortitude that is necessary to plan out future courses when you have so much on your plate from courses you’re already enrolled in.

“There’s not a lot of leeway (but) there’s a lot of expectations on us that we can handle this workload and then also handle the idea of a future semester,” Drogosch said. “Like give us a break, we’re trying our best here.”

In the spring semester, spring break is the only legitimate break where students find themselves away from the social and academic expectations that the University places upon them. Not all, but a great deal of students seldom have to focus strictly on course work during the break, allowing them to relax their minds and briefly escape the realities of being a college student.

“Spring break is the time where most of (our) exams have happened before or they’re happening after (the break), and it’s a whole week where you can just spend a few hours picking out your courses and putting them aside and then not worrying about them,” neuroscience sophomore Amna Ullah said.

Having a chance to pick out their future courses during the mental break period that is spring break can allow students to return to the University more prepared before being pushed back into the final stretch of the semester.

UT must consider releasing course schedules over spring break. By doing this, students will have the opportunity to develop a clear idea of how they want their class schedules to shape up for the upcoming semester.

West Jr. is a journalism sophomore from New Orleans, Louisiana.