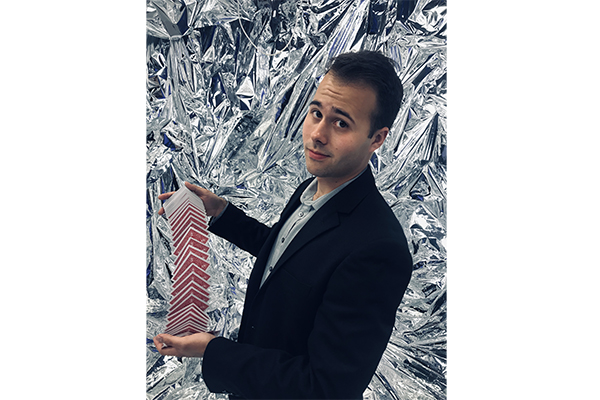 As a magician, religious studies alumnus Giancarlo Bernini, who graduated in 2019, takes pride in using magic to bring joy to others. He has been practicing since he saw a card trick in fifth grade and learned magic can be not only an illusion but a gift.

After performing on “Penn & Teller: Fool Us,” a television show hosted by celebrity magicians Penn & Teller who attempt to guess the methodology behind aspiring magicians’ tricks, Bernini sat with The Daily Texan to talk about his journey from doing tricks at recess to the big leagues.

Daily Texan: When did magic shift from being a hobby to something more?

Giancarlo Bernini: When I was a kid, (doing magic) was just like, “Whoa, I’m doing this trick that brings joy to people in a way I’ve never seen anything else do.” It became something I could give to other people. The more I did it, the more I fell in love with it, and I never found anything that I was as passionate about. It was always the thing I got to do for fun whenever I was done with work, and I was like, “What if this was my work?”

DT: Finding out you got on the show, what was that moment like for you? How did it help legitimize this dream?

GB: I heard the producers were going to announce who made the show much later on, so I wasn’t expecting it. I opened my email and saw the first line saying, “We’d like to book you to be on the show.” I made a noise that I don’t know how to describe, but my mom was sitting next to me and she started crying. She thought I was having a heart attack. Hearing they wanted me to be on the show validated that this is something I might actually be able to do. Clearly, it’s not just me, my best friend and my mom who think I’m great.

DT: Fast forward, you go to film the show. What was that like?

GB: I’m a huge fan of the show, and suddenly being on the other side of the camera was such a surreal moment. Doing a magic trick for Penn & Teller — not just because it’s my favorite TV show but because they’re the biggest names in magic — was exhilarating.

DT: How did it compare with other performances you’ve had?

GB: It’s weird because there’s a crowd of people in front of you, and it’s a decent-sized crowd. But also you’re thinking, “I’m not really performing for them. I’m performing for the million or so people that are going to watch this later.” Also, watching people get excited about it now is weird because I’ve been excited about this for months, but now that the air date was announced, everyone around me is freaking out.

DT: So now that you’re newly graduated, what are your plans from here?

GB: I’m moving to Dallas to become a professional magician and try to get as many gigs and share as much magic as I can, and hopefully that will slowly snowball into more opportunities to perform. I don’t do magic so that I can make money. I want to make money so I can keep doing magic. I just want to be able to do this for the rest of my life.