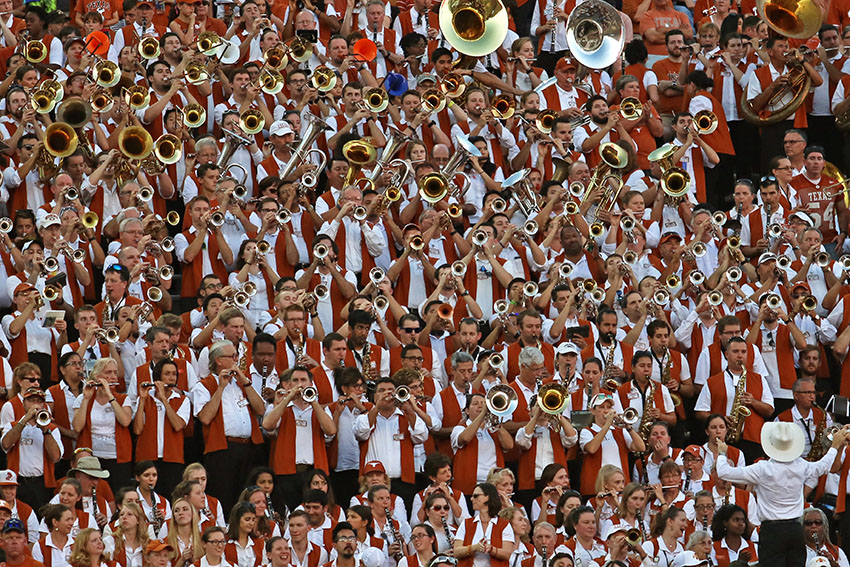 The Longhorn Alumni Band recently completed a feat more than two years in the making: performing during the 75th anniversary of D-Day in Normandy, France.

“It was a very exciting and emotional trip for everybody,” said Geof Sloan, Longhorn Alumni Band president. “We knew it would be a huge honor to perform, and we approached it as, ‘What can we do to honor those who have died and survived D-Day, and how can we best represent UT, Texas and the United States?’”

D-Day, which occurred June 6, 1944, marks the day when Allied Forces stormed the beaches of Normandy, turning the tide of World War II and marking the beginning of the end of Nazi Germany’s control over Western Europe.

The parade was not only a chance for the band to honor the many soldiers who fought that day but also an important family event, Sloan said. Many alumni band members had family members join them on the trip, including Evan Carter, a trumpet player whose parents are also in the band.

“Growing up, I watched my parents be part of the alumni band,” government junior Carter said. “To be able to join their ranks and be a part of this memorial parade along with them was a great experience and opportunity that I’m glad I got to have.”

Normandy offered Longhorn Alumni Band members a setting to learn more about what happened on D-Day. Alumni band member John Purdy said he had the chance to talk with veterans about their stories and walk through the cemeteries where the names of those who died were being honored.

“It was a very moving experience just being there,” Purdy said. “They had several veterans there who spoke about their stories and experiences, and it was an interesting experience for me to hear it straight from them.”

Carter said he found the trip and the performance to be much more emotional than expected.

Sloan said he is proud of the alumni band’s performance, and he hopes everyone understood the significance of being in Normandy on the anniversary of D-Day.

“Everybody was very moved and they played their hearts out,” Sloan said. “The band rose to the occasion and had a stellar performance.”