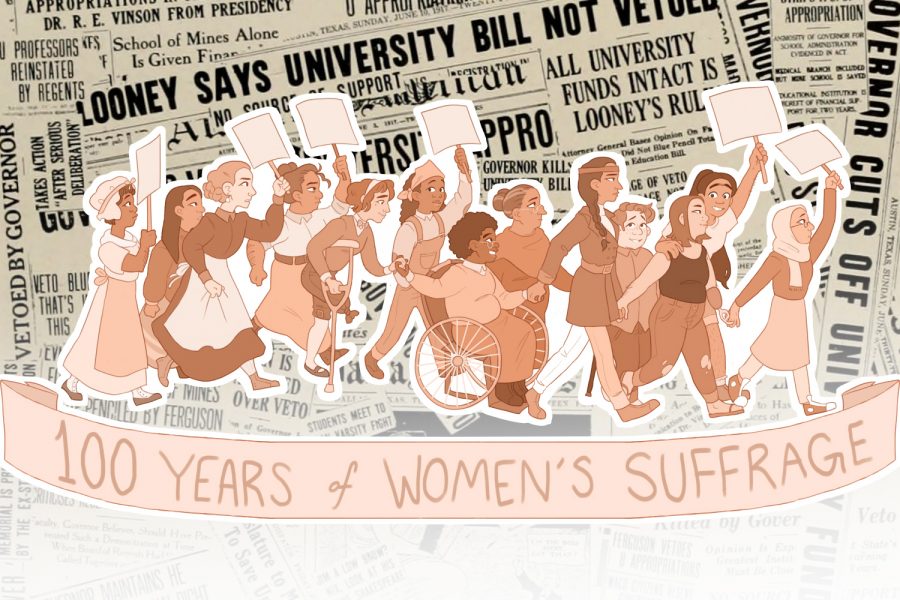 Texas unanimously adopted the 19th Amendment much earlier than expected. Conservative Southern Democrats ran the state at the time, but a close gubernatorial election, a secret quid pro quo and a fight between the impeached governor of Texas and the state’s flagship university gave suffragists a unique political opportunity to win the vote on June 28, 1919.

Texas was the first Southern state and ninth in the Union to do so.

“University life may be discontinued next year as far as you are concerned,” read a University Co-op advertisement in the March 28, 1917, issue of The Daily Texan. “There may not be any more varsity basketball games, tennis games, track meets, boats on the river or even college chums — FOR YOU. Your school days will be only a memory.”

The Co-op’s advertisement was a reaction to then-Gov. James Ferguson, who vetoed all of UT’s funding in retaliation to the University president and Board of Regents’ refusal to fire a handful of faculty members he disliked.

Then, in May, 2,000 angry students, alumni and professors marched from campus to the governor’s office in protest. They chanted, played “The Eyes of Texas,” and carried signs reading “University’s future threatened” and “We oppose one man rule,” according to a historian’s account in the 2010 issue of The Alcalde.

“UT has a lot of alumni, and they’re in powerful places within the state, and there’s a lot of them, and they were all very angry,” said Rachel Gunter, Collin College history professor and expert on the Texas women’s suffrage movement.

Students and alumni were not the only ones displeased with Ferguson’s conduct. The State House impeached him, and the Senate convicted him of nine charges, including obstruction of the war effort due to the University of Texas’ involvement with research during World War I. Lawmakers were going to remove him from office, making him ineligible to run again, but Ferguson resigned before they could, which allowed him to run again in 1918.

Despite angering many people, Ferguson was still very popular, Gunter said, so the Senate needed another way to ensure he didn’t return to the governor’s desk.

So, Cunningham cut a deal with State Rep. Charles Metcalfe. If he could get acting Gov. William Hobby to sign the bill, she would get women to vote against Ferguson. Since Texas was a one-party state, primary elections
controlled who won the governor’s office.

“She’s amazing at political strategy,” Gunter said. “It’s basically a quid pro quo deal, but she doesn’t say she was involved. She’s very happy to let the Legislature say it was their idea because it will be easier to deal with them later.”

Gunter said the 386,000 women who registered to vote in those two weeks before the election were crucial in Ferguson’s defeat. Two years later, when the 19th Amendment was on the Senate floor, Texas legislators decided voting in favor of full suffrage was better than being voted out of office later on.

“If you vote against ratification, would it not follow that those women are going to kick you out of office?” Gunter said. “So, because they already have to answer to them, it makes a massive difference.”

In the decades that followed the 19th Amendment’s ratification, there were still great strides to be made when it came to women’s rights and voting rights.

Poll taxes, racial barriers and citizenship requirements kept women of color, poor citizens and immigrants from exercising their rights. The suffrage movement was not as progressive on these issues,
Fuller-Seeley said.

“Most of the white women were willing to push African Americans and Latinos out of the picture to get what they wanted for
themselves,” Fuller-Seeley said.

Though minorities were not allowed to be involved in the movement, their role was at least considered when developing
political strategy.

“(The women’s suffrage movement) was one of the first great movements to pay attention to everybody’s rights,” Fuller-Seeley said. “You can’t take it for granted.”

Fuller-Seeley calls women’s suffrage the “great mother movement.” It gave birth to the shift that changed how women can participate in democracy, and therefore society. It also laid the groundwork for other movements, most specifically the civil rights movement that happened in the later half of the century.

Minnie Fisher Cunningham’s organization became the Texas League of Women Voters in 1919. Throughout the 20th century, the league fought for women’s issues that continued after the right to vote was won, such as property rights and female representation in juries.

“The energy it took to get women — at the time white women — the right to vote was incredible,” said Grace Chimene, president of the Texas League of Women Voters. “We continued that fight through the years. Were we perfect every step of the way? No, but boy did it take energy, and we persevered, and we continued on fighting all the way to try to get it so that more and more Texans and citizens
can vote.”

The league still exists today, giving out nonpartisan voting information and fighting for issues their members care about. Within the past two years, the league gained eight more chapters. Chimene said this is evidence that Americans still need to exercise the rights they won all those years ago.

“There’s a great new interest in civic (life),” Chimene said. “There’s a huge interest in providing voter education and getting out to vote and registering voters … It’s just such a great time to do this because everyone was so complacent before, and now we’re just having a huge upturn in people who want to participate in
our democracy.”