‘Fueled by stories of students who spoke out’: How student activists helped get free tuition for low-income students 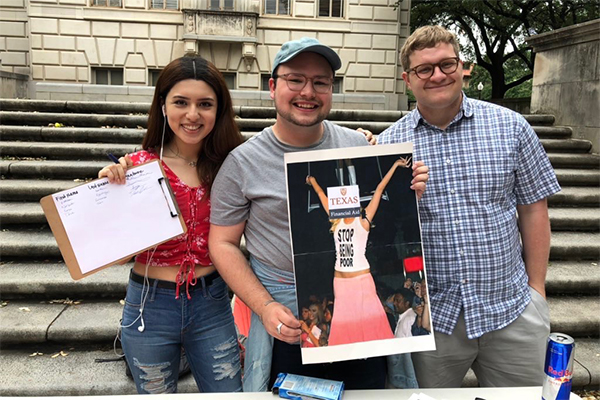 Student activists are calling for more recognition amid UT’s recent decision to cover tuition for low-income students starting in fall 2020.

Two months after the protest and petition, UT President Gregory Fenves announced July 9 that students who come from families with yearly incomes of up to $65,000 will have their tuition covered by a new University endowment.

“This announcement nearly met what we wanted out of the protest,” said Henry, an acting and radio-television-film junior. “But it feels strange that there is a missing component to this story, that instead of acknowledging that students had to ask and fight for this, (the University said they) were the ones that decided to do this.”

UT spokesman J.B. Bird said the issues behind the protest, such as financial aid, are important to the University.

“Zachary was talking about issues that resonated with students at the University and families all across the country,” Bird said. “That’s one reason Fenves started working on improving and increasing
financial aid.”

Henry said he tried to speak with Fenves about students’ concerns before the protest but said he did not receive a direct answer about whether anyone was looking into solutions.

“If they did, it would have significantly altered the course of the protest,” Henry said.

Bird said the University respects students’ rights to protest peacefully and appreciates it when students do so.

“If we are struggling to communicate with students, we always want to improve, and we want to hear from students on how we can improve,” Bird said.

“I, alongside University Democrats as a whole, thought it was important to help spotlight the formerly unfair financial aid practices and stories of students affected,” government sophomore Cascino said. “This movement was fueled by the stories of students who spoke out.”

Cascino said he believes the protest was instrumental in getting the financial aid changes made and said he has learned the importance of students coming together on an issue that directly affects them.

“We can never underestimate the power we have in numbers,” Cascino said. “On a college campus and especially at UT, the intersectionality and various backgrounds of students makes us stronger as we all passionately advocate for change on a certain issue.”

Henry said the new endowment is a step in the right direction, but he hopes to see more changes to offset the high cost of living in Austin and attending UT.

“This is a great first step in eventually getting to where higher education is fully accessible,” Henry said. “Our voices as students have immense power, and this is a testament to that. We need to look forward to the next school year and beyond for really great changes to make our university even better.”