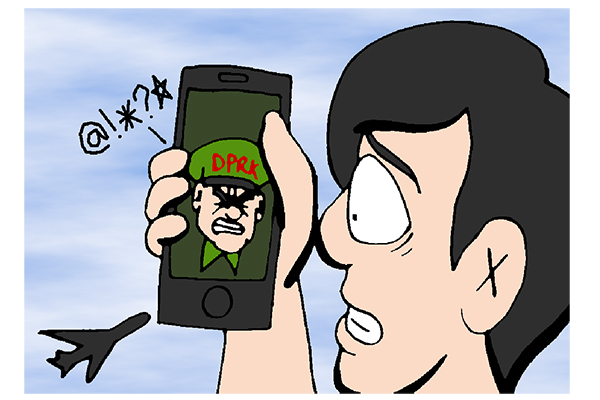 Some UT students are studying abroad near a country that some Americans fear greatly.

The political relationship between North Korea and the United States is fragile with the recent rise of nuclear threats. Students studying abroad in Seoul, South Korea, received warnings from friends and family before departing to their summer program.

Seoul is about 30 miles from the border with North Korea. However, radio-television-film senior Elizabeth Miget isn’t fazed by her proximity to
North Korea.

“I understand tensions are high,” Miget said. “But I just felt like I can’t live in fear.”

Psychology senior Leslie Delhomme also received concerns, but not from her family.

“My family travels a lot, so they know what places are safe,” Delhomme said. “My sister posted about it on Facebook and all her friends are like, ‘Is she going to be OK?’”

On June 30, President Donald Trump visited the demilitarized zone, a stretch of land at the border of North and South Korea serving as a buffer between the two, to meet with North Korean leader Kim Jong-un for about an hour. This was the first time a sitting U.S. president crossed the border into North Korean territory.

Miget said she noted some of the locals’ excitement toward Trump’s visit, such as when a stranger approached her on a train after Trump’s visit and told her he respected America.

“My friend who’s Korean said he didn’t know that so many people didn’t like Trump until he came to America,” Miget said. “I guess in (South Korea), it’s more like a position of power and people respect that hierarchy.”

Some international students at Korea University have visited the demilitarization zone. Studio art senior Allison Nguyen said she didn’t consider the possibility of visiting the border until she arrived in Seoul.

“I realized how close Seoul is to (the border),” Nguyen said. “I feel like if they allow visitors, it’s safe and they have (tour) programs. It’d be fine to
just visit.”

Miget said South Koreans, especially those from older generations, are aware of their proximity to North Korea, but don’t have a sense of danger.

“It’s a safe country,” Miget said. “People mind their own business. I mean, they stare, but at a distance.”

Delhomme and Nguyen both feel safer in Seoul than in Austin.

“My friends and I leave our stuff out at a coffee shop and go to the different floors (in Seoul),” Nguyen said. “We’ll just leave our laptops and everything and I feel perfectly fine. I don’t have to ask anyone to look out for it because everyone seems to mind their own business.”

All three students said South Koreans have been kind to them as foreigners. Miget said the country was the optimal destination for her.

“Western people are more and more interested in Eastern (culture), like K-pop, dramas and movies,” Miget said. “It’s growing, and I feel like now is a good time to learn more and get involved in that.”