All Eyes on Him: Ehlinger’s maturity positions him to carry the weight of Texas 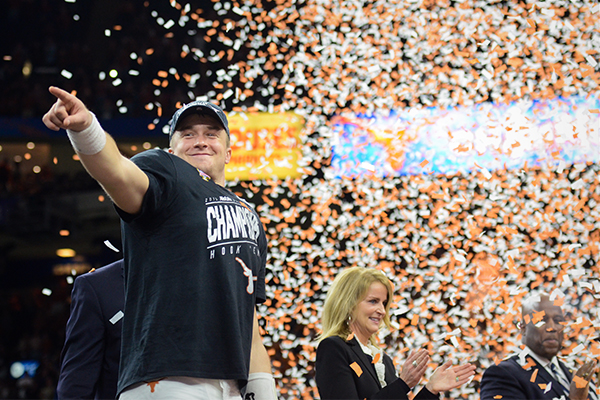 Over 50 reporters crowded around the podium where Sam Ehlinger was expected to speak at Big 12 Media Days. The junior quarterback, along with five other Texas representatives, ran slightly late.

With each passing minute, reporters shuffled their equipment, fighting for a good angle in the media scrum. And once Ehlinger stepped up to the mic, the crowd silently held on to his every word. That’s what happens when you’re the face of Texas Football.

Nearly every Longhorn football telecast has shown footage of a baby Sam Ehlinger. The montage usually starts with a video of him singing “The Eyes of Texas” and ends with a still photo of him flashing the “Hook ‘Em” sign with both hands, all to illustrate one thing: He’s been waiting for this moment.

“This team always had a belief in Sam,” senior wide receiver Collin Johnson said. “This guy’s like an alpha male. He came in his freshman year, and he carried himself like a junior or senior.”

Although the bravado was there in his first season, the results weren’t. The Longhorns went 7–6 — an upgrade from the year prior but not to the expectations set before the year started — and Ehlinger had 13 touchdowns to seven interceptions.

Last year, the pieces began to come together. Texas finished with 10 wins for the first time since 2009. The season ended with a win over then-No. 5 Georgia, setting the stage for a Longhorn team that has realistic championship aspirations for the first time in nearly a decade.

For the first time in Ehlinger’s collegiate career, the junior quarterback enters preseason camp without the burden of having to compete for the starting job. Unlike the last several years, the announcement of the starting quarterback won’t be a suspensful one.

Despite being on watchlists for the Maxwell Award, the Davey O’Brien Award and being voted as the Big 12 Preseason Offensive Player of the Year, he doesn’t feel the suspected pressure to lead Texas to the proverbial promised land.

“I don’t look at it like that,” said Ehlinger when asked if he’s ready to step up to be the leader. “The moment you start believing the hype or the hate, that’s when you can deviate from the path you’re supp osed to be on.”

The hate, which is often magnified more than the hype, has made its way to Ehlinger this offseason.

Pro Football Hall of Famer Terry Bradshaw spoke at his alma mater Louisiana Tech and discussed the amount of five-star quarterbacks Texas has recruited. Ehlinger was never in the question, but ended up in the crossfire.

“One year, they signed three (five-star) quarterbacks,” Bradshaw said. “Two are now gone, and one is playing, and he ain’t that good.”

The Hall of Fame quarterback wasn’t the only one with comments for the Heisman hopeful. Earlier that week, former Oklahoma quarterback Baker Mayfield was asked about Ehlinger and the Longhorns and made sure his thoughts couldn’t be misconstrued.

“He doesn’t like me, and I hope he knows I don’t like him either,” Mayfield said to Norman’s SportsTalk radio station.

Ehlinger heard both comments. Instead of firing back, he took the high road.

“It’s completely irrelevant in my mind,” Ehlinger said. “I’m very focused on taking care of what I can control ­— the internal events that go on with my teammates, my team and myself and making us better. All that’s outside noise.”

During his time at Texas, Ehlinger has taken actions to keep his focus on what takes place on Saturdays. Last year, Ehlinger deleted all social media during the season. He wanted to block out the constant chatter that comes with being the starting quarterback at a major program like Texas.

“That’s been my main objective: Shut out the positive and the negative noise and focus on what’s truly important and what’s truly going to make us better,” Ehlinger said.

For the Longhorns and their quarterback, getting better only means two things: winning a conference championship and making an appearance in the College Football Playoff.

“I’ve always said I want the University of Texas to be competing for championships,” Ehlinger said. “I think that right now we’re at a place in our program where we have a chance to do that.”