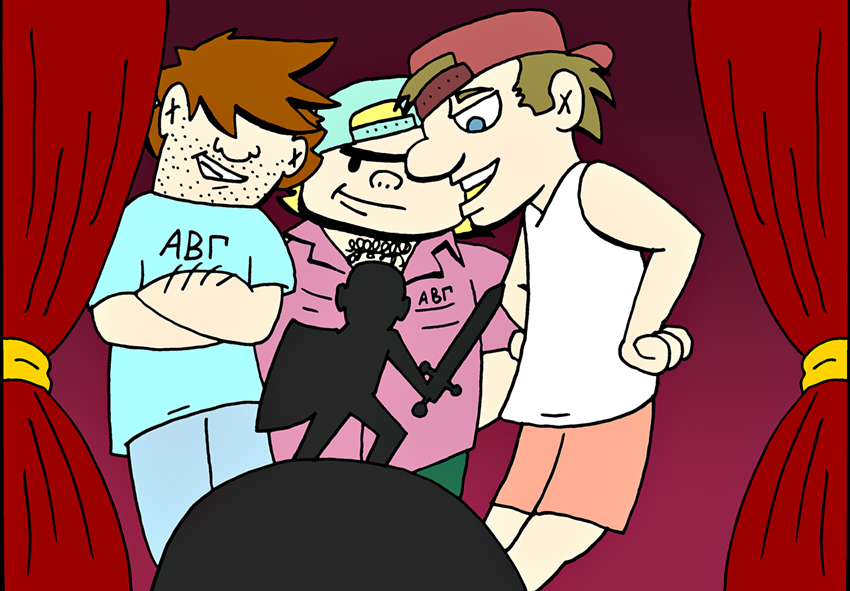 It’s almost showtime on Broadway. As the player walks down the stage, a group of evil fraternity brothers get in their way. The gamer must start smashing Z and X on the keyboard to get through the next level in “Clemativa!”

Radio-television-film senior Will Nakata created “Clemavita!” — a Broadway-themed video game set to show tunes with visuals in 2D and 3D animation. Nakata said he had an interest in both filmmaking and video game development as a young child.

“I ultimately decided to major in RTF,” Nakata said. “(But) I was incredibly happy when I discovered that game development classes were a part of the major.”

The game follows a protagonist in search of his brother in the town of Clemativa, a city where an evil fraternity is in charge. In certain sections of the demo, the game’s characters break out in theatrical numbers and songs. The vaudevillian music masks the difficulty of the first level, where the main player tries to fight a “frat bro.” Nakata said the backdrop music to the adventure helps tie in the intersectionality between video games and Broadway productions.

Nakata’s sophomore year in college inspired the idea for “Clemativa!” The game developer lived across from members of a fraternity and said they often threw parties at “inconvenient times” and constantly yelled the “most backward” phrases.

“It felt fitting to have several fraternity brothers be in charge of Clemavita, a word I made up combining the Latin word … ‘vita’ and ‘chlamydia’ to represent the town’s nonsensical pride in their actions,” Nakata said.

The world of “Clemativa!” has been in development for almost three years. Cara Daeschner, a radio-television-film and journalism senior, met Will through Delta Kappa Alpha, a cinema society on campus, and said seeing Will develop his project throughout the past few years has been “inspiring.”

“He had this vision for (the game) in the very beginning that he showed me, and seeing it actually get done with such talented singers was incredible,” Daeschner said. “He worked on certain aspects of the game even if that meant not sleeping for a couple of days.”

Nakata said the earliest memories of his love for musical theater started when his parents took him to Broadway shows as a child. This eventually turned into the “simple song” that played in his head and inspired him to combine his goals of creating games and his love for showtime tunes.

Andrew Woodward, advertising and radio-television-film junior, was a voice actor and singer for the video game’s antagonist. He said the visuals and music unite as a complete package.

“I got to play a few versions of it, and it kept getting better,” Woodward said. “It’s a lot of fun.”

Nakata said that although his video game started as a class project, the process has been a “life-changing experience.” The project guided Nakata through a dark moment in his life as he struggled with depression and anxiety when his mother passed away last November.

“The three semesters prior to creating this game were extremely difficult for me,” Nakata said. “Being able to keep busy with a project I truly cared about while having incredibly supportive friends made an impossible project become a reality. It has helped me overcome my personal struggles with a sense of passion and motivation that I had never felt before.”