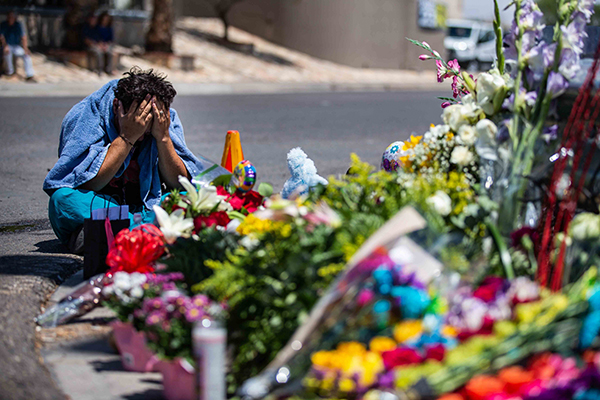 Things are different in El Paso.

The air smells different when you’re driving down I-10, passing the star on the mountain to visit your relatives on the other side of town. The sun burns differently when you’re standing in the dry heat with your friends next to the alligators in San Jacinto Plaza waiting for an ice-cold raspa from the local paletero. The dirt feels different when you’re standing on Mount Cristo Rey overlooking a binational community that has prospered together. This is how people spend their time in El Paso — embracing the differences that make them unique.

Yet for all El Pasoans, time stopped when we saw our community terrified, running out of a Walmart we’ve all visited, as the border city endured one of the deadliest massacres on American soil.

“Around 2 in the afternoon, we found out that my cousin had been there,” said Andrea Ocañas, business honors and accounting junior. “The man behind him in line was shot, but he managed to duck down. It felt pretty unreal — especially so early on when we weren’t sure of how bad the situation was.”

Ocañas said she is shocked to think that her family came so close to being torn apart. At the time, she and her cousin didn’t know how to explain what happened.

“When he got back to his mother’s house, his mom had asked why he had blood on his shoes,” Ocañas said. “How do you explain something like that to your 90-year-old mother?”

On Saturday, Aug. 3, 2019, a gunman from Allen, Texas, a suburb of Dallas, drove more than nine hours to El Paso with a xenophobic agenda. He killed 22 people and injured over two dozen others in a predominantly Latinx community.

Many people have taken that drive. Whether it’s to visit relatives or head back to UT for the upcoming semester, that drive is lonely. For nearly 10 hours, the gunman drove with hate in his heart, a mixtape that only led to despair and disbelief for a community so proud of its ethnicity and culture.

The people of El Paso cannot believe it. Scrolling down endless waves of news updates, social media posts and heart-wrenching texts, El Pasoans are shocked because it happened in their beloved Sun City. It was not their El Paso.

“El Paso is the city that holds the most sense of community,” UT alumna Taylor Sanchez said. “It is growing up playing in the front yard for hours upon hours with my friends and neighbors. We were hardly supervised by our parents because they knew we were safe.”

Sanchez recently graduated from UT and has gone back to El Paso to work for the mayor’s office. She said the office has filed for a declaration of local disaster and hopes that the community will come together to become stronger.

For El Pasoans, that is exactly what El Paso is: community and strength, family and love, friends and unity.

Each name, each detail reported continues to make hearts drop. People who are friends with El Pasoans constantly joke, “Does everyone from El Paso know each other?” Not all the time, but we all know someone who knows someone. We’re all connected. That’s what makes this tragedy so hard to swallow.

Andre Anchondo, 24, and Jordan Anchondo, 25, died protecting their family. They shielded their newborn baby from the carnage, and as a result, paid the price with their lives. Their friends remember them as heroes.

“For me and Andre and all of our friends, El Paso to me is making plans in middle school to go to the movies on Fridays after school or the mall on Saturdays,” UT alumna Bailey Bridler said. “It is making plans together with all our friends, to be together, talk, laugh and make memories together.”

El Paso is simple. It’s not the gunman that drove 9 hours and 15 minutes to get to the 915. According to the people, El Paso is family and knowing that the community around it will become stronger and fiercer than it already was. El Paso is a breathing thing whose heart — the people — will always be ready to fight hate with love.

Garcia is a journalism senior from El Paso. He is a senior Life&Arts reporter and associate photo editor.